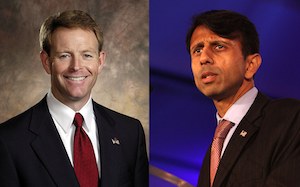 In the immediate wake of the 2012 election, Louisiana Gov. Bobby Jindal called on his fellow Republicans to “stop being the stupid party.” He said it was “no secret we had a number of Republicans damage our brand this year with offensive, bizarre comments – enough of that.” Jindal was referring to the infamous remarks by top-tier GOP candidates, most notably former Rep. Todd Akin of Missouri, about rape and pregnancy.

So much for that! Jindal has appointed Akin’s most prominent defender, Tony Perkins, to a seat on the Louisiana Commission on Law Enforcement. Perkins is president of the D.C.-based Family Research Council (FRC), an anti-gay hate group known for making its share of “offensive, bizarre comments.” Perkins and the FRC earned that designation by consistently demonizing and smearing gays and lesbians – including calling them pedophiles – with falsehoods.

Perkins has deep Louisiana roots. He served in the state House of Representatives from 1996 to 2004 and ran unsuccessfully for the US. Senate, placing a distant fourth, in the 2002 GOP primary. Before that he was a TV news reporter and a reserve police officer, until he was suspended in 1992 for failing to report an illegal conspiracy by anti-abortion extremists to his superiors. He became head of the FRC in 2003 but never fully left Louisiana.

In fact, Jindal named Perkins to the Louisiana Commission on Marriage and Family in 2008, supposedly on the basis of “expertise in community programs and assistance.”

The Commission on Marriage and Family website provides meeting minutes for the past three years. Perkins is listed as absent for seven out of seven meetings. Since Perkins has a day job in Washington, D.C., and is apparently unable to attend those meetings, it’s hard to imagine he’ll be any better about attending the Commission on Law Enforcement meetings.

But Jindal appointed him, and Perkins accepted, because they both have something to gain. Jindal dreams of running for national office, and he wants support from and access to religious-right primary voters. That’s why he’s scheduled to speak, as he’s done in the past, at the FRC-sponsored Values Voter Summit in D.C. next month.

Perkins, on the other hand, dreams of running for office again in Louisiana, and he’s been floated recently as a possible challenger to Sen. Mary Landrieu. He maintains residency in Baton Rouge despite apparently spending most of his time in D.C. The commission seats give him an opportunity to pad his resume and keep his name in circulation back home.

It’s all part of an effort to whitewash his image, which is understandable. In addition to his controversial actions as a reserve police officer, Perkins was caught in 1996 covering up the purchase of Klan leader David Duke’s supporter list for a campaign he was managing. That campaign later settled with the Federal Election Commission and paid a fine. Then in 2001, Perkins was caught speaking at a gathering of the Council of Conservative Citizens. Perkins addressed the white supremacist group, which has called African Americans a “retrograde species of humanity,” while standing in front of a Confederate flag. He later denied knowing about the group’s extremism.