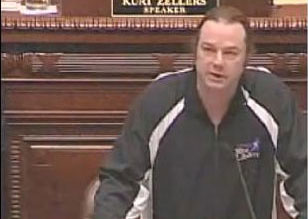 Bradlee Dean delivers the opening prayer before the Minnesota House of Representatives in 2011.

Bradlee Dean, the bombastic Minnesota Christian rocker whose venomous defamations of LGBT people (see here, here, and here) and controversial scare tactics at school assemblies have earned him a reputation as an anti-gay hatemonger, seems to have fallen on hard times.

Aaron Rupar, writing at Minneapolis Citypages, notes that the Annandale, Minn., headquarters for Dean’s youth ministry, You Can Run But You Cannot Hide International (YCR), went up for rent earlier this month. Rupar further notes that Dean’s staffers, including his infamous “street teams,” have all walked out on him. Some of those teams raised eyebrows last year over what looked like improper fundraisingwhen members solicited donors at a public location by claiming YCR was a “suicide prevention” organization.

Following a report by Minneapolis Citypages in July about a young Dean staffer who quit and characterized the ministry as a “cultic sham,” staffers reportedly compiled complaints of mistreatment and exploitation. They took them to the Minnesota attorney general and are reportedly working on a mediation proposal with Dean’s camp.

A source close to the situation told the Citypages that Dean “is pretty much done.” If that’s the case, it’s quite a fall for the man who once enjoyed an alliance with Congresswoman Michele Bachmann and opened the Minnesota House of Representatives with a rambling prayer suggesting that President Obama is not a Christian.

Here are some highlights from Dean’s long, strange trip:

2003: Dean joined the “Embassy of Heaven,” an Oregon-based, far-right Christian group with antigovernment “sovereign citizen” leanings that seeks to separate from secular government. Dean “renounced” his “allegiance to the world” to become a “sovereign citizen” in the “Kingdom of Heaven.” The Embassy was run by Glen Stoll, who has been embroiled in a long-running legal dispute with the Justice Department after the government accused him in 2005 of operating a tax fraud scheme that uses sham trusts to help customers evade taxes.

2005: Under Stoll’s guidance, YCR reportedly organized as a “ministerial trust.” (The Ripple in Stillwater blog in 2010 wondered if perhaps Dean has been caught up in the IRS’s investigation of Stoll and his schemes.)

2011: Dean filed a $50 million defamation lawsuit against Rachel Maddow after she reported statements in which he supports Muslims who called for the execution of LGBT people in America. He was also angry that she made fun of his name and his music. He filed a similar suit against reporter Andy Birkey at the news site Minnesota Independent, which folded in late 2011 for reasons unrelated to the lawsuit. He hired attorney Larry Klayman to handle the lawsuits. Klayman is a far-right, former Justice Department lawyer who gained notoriety in the 1990s for filing numerous, meritless lawsuits against the Clinton administration. More recently, Klayman convened a “citizens grand jury” that has “indicted” President Obama. He has called for a coup against Obama and set Nov. 19 as the day Obama will be ousted from office, ending his “reign of terror.”

2012: Dean was ordered to pay Maddow and the Minnesota Independent almost $25,000 in legal fees.

Dean is appealing his Maddow lawsuit. In early August, he issued a fundraising plea that included his reading of the Declaration of Independence and the following lines: “Think the Trayvon Martin/Zimmerman case was bad? You should see what MSNBC and Rachel Maddow did to Bradlee Dean. Help his lawsuit against them.”

Whether Dean is truly finished remains to be seen. He continues to blog at the YCR website and he is scheduled for an Oct. 3 appearance at Richmond High School in Rockingham, N.C., as part of something billed as “Liberty Week.” Dean will speak on “The Price Paid for Our Freedom.” He may yet have a few stops left on his long, strange trip.