A group of politically right-oriented long-haul truckers is attempting to organize a three-day protest starting later this week in Washington, D.C. To make their point, they are planning to bring all traffic around the nation’s capital to a grinding halt by creating traffic jams on the Beltway of highways surrounding the city. 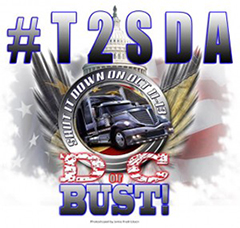 The only problem with the protest — scheduled for Oct. 11-13 — is that it isn’t exactly clear what the truckers are protesting, nor is it clear what will meet their demands. It appears, though, that they expect Congress to impeach President Obama, overturn the congressionally approved health care reforms, and disband the Department of Homeland Security.

The only aspect of the planned protest that is clear is that it is fueled by conspiracy theories regarding President Obama and fears about an imminent economic collapse. And it is being promoted by antigovernment “Patriots” and radio-show hosts with a history of far-right agitation.

One of the would-be participants told U.S. News and World Report that the truckers intend to inspire the masses to force the arrest of President Obama and members of Congress.

The chief organizer of the “Truckers Ride for the Constitution” is a former country music singer named Zeeda Andrews who created a website and Facebook page for the campaign earlier this summer, and it has been gradually building momentum with the help of right-wing radio hosts.

Andrews’ website details the “demands” of the truckers in a somewhat oblique fashion, presented as a list of paranoid fears of supposed “unconstitutional” behavior by the government. Indeed, the list of grammar- and punctuation-challenged demands begins: “Long before he was president, Barry Soetoro, aka Barack Obama, was already plotting with others, to overturn the Constitution for the United States.”

It then goes on to list a variety of offending actions – including emissions regulations for trucks in California, and a lack of truck parking (“More truck stops have went out of business because of this administration’s economic impact,” the manifesto reads). Among the actions the truckers appear to believe are unconstitutional are the Affordable Care Act, the National Defense Authorization Act, and the Patriot Act, since the truckers insist the Department of Homeland Security is an “unconstitutional” entity.

It also claims the Obama administration is violating the War Powers Act by “exposing, and administering experimental, psychotropic, mind altering drugs for control over soldiers during secret, clandestine operations.”

Andrews told U.S. News and World Report that among the actions that Congress could take to prevent the “shutdown” by the truckers would be the impeachment of President Obama. But not all of the participants agree.

"We are not going to ask for impeachment," a Georgia trucker named Earl Conlon, who claimed to be in charge of logistics for the protest, told the magazine. "We are coming whether they like it or not. We're not asking for impeachment, we're asking for the arrest of everyone in government who has violated their oath of office." Among those he expected to see arrested are former House Speaker Nancy Pelosi and Sen. Dianne Feinstein of California.

One of the most avid supporters of the protest is radio host Pete Santilli, who recently joined up with fired Pennsylvania police chief Mark Kessler to cohost a Patriot-movement radio show. (Santilli is currently best known for saying on his own radio show last May that he would like to “shoot Hillary Clinton in the vagina” and then watch her slowly die.) He hosted Andrews on his show recently to promote the protest, promising to “shut Washington down.”

On that program, Andrews made clear that the purpose of the protest was to warn Americans that the government was conspiring to bring down the nation’s economy. “They are going to crash the economy, there’s no doubt about that,” she said. “That’s what they’re planning.”

Conlon, in the meantime, appears to be promoting the classic Patriot-movement strategy of applying a “Citizens Grand Jury” — in which ordinary “sovereign citizens” supposedly can convene a jury and declare federal laws unconstitutional without court approval — to the elected officials in Washington. He told the U.S. News and World Report reporter that such a jury would be used to indict various liberal officials.

"We want these people arrested, and we're coming in with the grand jury to do it," he said. "We are going to ask the law enforcement to uphold their constitutional oath and make these arrests. If they refuse to do it, by the power of the people of the United States and the people's grand jury, they don't want to do it, we will. ... We the people will find a way."

However, the movement is already showing signs of fractiousness: Andrews has angrily disclaimed Conlon’s participation, warning him on the protest’s Facebook page that he has been “advised NOT to misrepresent himself as a spokesperson for this peaceful event.” One post commented: “Although Earl riled up a sensational title, he stepped out of bounds of our peaceful intent and methods. DHS would love to have a reason to use their bullets.”