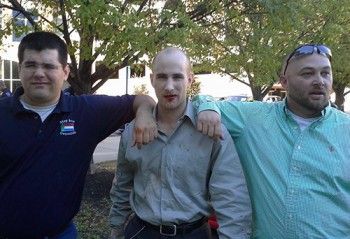 Indiana State University police are investigating what the department director says is the possibility that an assault on a member of the white supremacist Traditionalist Youth Network (TYN) by a lone anti-racist demonstrator was planned by TYN supporters.

“We’re not convinced it was a legitimate assault,” ISU Police Chief Bill Mercier told Hatewatch, adding that it may have been staged by the so-called victims.

About 15 TYN members, including Matthew Heimbach and Thomas Buhls, were on campus to protest a speech by Wise, part of ISU’s Office of Diversity’s “Eye on Diversity” series.

It was around 5:30 p.m. outside of a university parking garage when Mason Welch, 21, of Chicago allegedly approached Buhls, a TYN organizer and founder of the now-defunct White Student Union at Indiana University. Welch asked for a light for his cigarette. While Buhls was rifling through his pockets, according to a statement given to police, Welch started punching him in the face.

One reason for the police skepticism was that TYN members found Welch waiting for them even though they arrived 45 minutes earlier than they had told police they would.

Despite reports by TYN supporters that multiple counter-protesters attacked Buhls with Mace, a knife, and a sock containing a lock, an ISU police report indicates that Welch was the lone attacker. In the report, Buhls states that he was only punched, and police indicate that Welch was the only one sprayed with Mace during the conflict – by TYN members, while being restrained. Officers said they did find a knife and a “lock tied to a piece of cloth” when they searched Welch.

Brad Griffin, the editor of the white nationalist blog Occidental Dissent and the primary organizer of upcoming League of the South (LOS) events in Murfreesboro and Shelbyville, Tenn., jumped at the opportunity to use the ISU conflict, staged or not, to issue a warning to counter-protesters this weekend that League members and supporters will not hesitate to exercise their right under Tennessee’s “Make My Day” law to stand their ground, using deadly force if necessary.

This is a troubling development for a group whose Facebook event page prominently features a discussion of open carry law reciprocity between states.

Heimbach and his followers were recently banned from the League and its events after a photo became public of him performing a Nazi salute with members of the Imperial Klans of America (IKA) and the Aryan Terror Brigade (ATB) standing under swastika banners. He is also scheduled to speak to the neo-Nazi National Socialist Movement (NSM) in the coming months. These developments prompted League president Michael Hill to boot Heimbach, who Hill previously awarded a plaque for “aggressive” promotion of Southern independence, from the organization.

Welch, who is still being held in county jail for battery resulting in bodily injury, is now being used to drum up sympathy for extremist groups like TYN, as well as others, including the League.

Wise, who took the stage as scheduled an hour and a half after the attack, just hopes League members don’t confuse someone like Welch with the non-violent counter-protesters from the Tennessee Anti-Racist Network who plan to demonstrate at the League events this weekend.

“I am going to contact the network,” said Wise, “and tell them these guys are going to be armed and on a hair-trigger.”