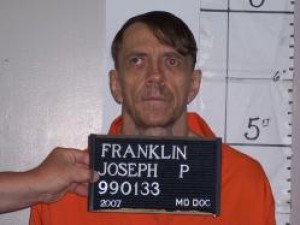 As he awaits his November date with the executioner, prolific racist serial killer Joseph Paul Franklin wants something he never showed any of his victims.

If the courts won’t give it to him, he hopes maybe God will.

“I’ve prayed to the Lord for forgiveness,” Franklin told Hatewatch this week in a series of telephone interviews from the condemned unit at the Potosi Correctional Center in Missouri. “I not only asked the Lord for me, but I’ve prayed for all of my victims, too. I go from name to name and pray for each one of those people and regret that I ever harmed and shot them the way I did.”

Once defiant and unrepentant, the 63-year-old death row inmate, a self-admitted savvy manipulator, is “doing everything I can” to save his own life – and to prepare for the next. He has renounced his racist past and extremist beliefs and he professes a Christian rebirth during the 33 years he has been locked up for roaming the country and gunning down an interracial couple in Wisconsin, two black boys in Ohio, a Jewish man coming out of a synagogue after worship in Missouri and at least three other people from Tennessee to Utah. Authorities suspect there could be as many as 20 murder victims.

Using a sniper rifle, Franklin said he also stalked and shot publisher Larry Flynt, putting him in a wheelchair, because Flynt featured interracial sex in Hustler magazine. Two years later, in the spring of 1980, Franklin shot and tore a gaping hole in the back of civil rights leader Vernon Jordan, who somehow survived the attack.

He was acquitted of shooting Jordan, who was president of the National Urban League at the time he was shot in a hotel parking lot in Fort Wayne, Ind. The jury, Franklin said, made a mistake.

“I was on a mission,” Franklin said, to kill as many Jews, blacks, and white women involved in interracial relationships as he possibly could. “I wanted to start a race war.”

Franklin said he thought the killing of another civil rights leader would cause black people to riot, sparking a race war.

Jordan, however, wasn’t even his first choice.

“I was going to kill Rev. Jesse Jackson,” Franklin said.

Franklin drove to Chicago in 1980 and even walked around the headquarters building of Jackson’s Operation PUSH on the city’s South Side, looking for a place to set up a sniper’s nest. But he could not find an ideal location in the busy neighborhood. Then he noticed what he believed to be an unmarked police car following him.

Franklin quickly left the city and was driving through Indiana when he heard on the radio that Jordan was speaking nearby.

He pulled over, retrieved his rifle and waited in the bushes near Jordan’s hotel room.

Franklin is a hero to neo-Nazis and other white supremacists, at least those who still remember him. The late neo-Nazi leader William Pierce dedicated Hunter, his novel about a lone-wolf racist terrorist, to Franklin.

Franklin’s chilling and sad words from death row today undoubtedly will shake and shock his supporters.

In his interviews with Hatewatch, Franklin spoke of his remorse and belief that anti-Semitism “is itself a sign of mental illness.” He talked about being beaten and abused as a boy growing up in Mobile, Ala., about joining the Klan, and leaving after just three months because there were more police informants under the sheets “than Klansmen.” He talked about devouring Mein Kampf over and over and about a road trip he said he took as a young neo-Nazi with David Duke and Don Black.

It was 1969 and the young racists were on their way to Arlington, Va., for a gathering of the World Union of National Socialists, started in 1962 by American Nazi Party leader George Lincoln Rockwell and European neo-Nazis. Franklin said they made the trip in Chevrolet Chevelle that belonged to a close friend of Duke’s, who rode with them. Duke, the future Klan leader, did most of the driving.

Franklin credits his change of mind and heart to decades meditation while incarcerated. "I began meditating St. Patrick's Day, 1985," he said. "But it took me a long time to really change. I was just so hardcore. When you're that hardcore it really takes you a long time to change, but eventually, over a period of time, I just gradually started changing my views on a whole lot of things. I just could not see myself out there doing that same thing again.

"I'm glad I got caught," he continued. "You know before I committed even more crimes. It's been said many times that the Lord will often times turn what appears to be a curse into a blessing and that is what happened in my case."

Franklin began his personal mission of murder in 1977. He drove around the country in a used Chevy he purchased for $975 from the proceeds of the first of his 16 bank robberies, hunting down interracial couples, “totally obsessed with Mein Kampf and Hitler” and consumed with a desire “to kill some Jews,” although most of his victims were black.

After being caught, Franklin told a Missouri courtroom that the only thing he was sorry about was that killing Jews was illegal.

He’s sorry about much more now.

Pending execution can have that effect on people.

“There are psychiatrists who actually believe that anti-Semitism itself is a mental illness,” Franklin told Hatewatch. “And I’m convinced personally that it’s true. I’ve met other people who were into Nazism and I could tell that they were mentally ill.

“People should be locked up just for espousing that type of views,” he continued. “That would have helped me out if I would have been locked up in a mental institution for a while until I was cured.”

Instead, he killed at least eight people and has spent more than half his life in prison. Now his time appears to have run out. The state of Missouri is scheduled to put Franklin to death by lethal injection on Nov. 20 for the sniper killing in the fall of 1977 of Gerald Gordon, 42, as Gordon was coming out of a synagogue in suburban St. Louis.

Gordon was the third of the eight people Franklin has been convicted of murdering from 1977 to 1980.

A last ditch legal fight over the method of execution could – at least for a while – delay Franklin’s scheduled execution.

TOTALLY OUT OF CONTROL

In the meantime, Franklin wants to have his say.

“I was mentally ill when I was out there, man,” he said. “I mean, I was just really out of control. That was not me out in the streets, doing that crap. I would not even think of doing that stuff anymore.”

Born James Clayton Vaughn Jr. in Mobile on April 13, 1950, Franklin’s childhood was by all accounts filled with poverty and pain, mostly at the abusive hands of his mother who made life for Franklin and his three siblings “a living hell.”

His parents, however, were not any more racist than “most other people” in the segregated South, he said.

“They weren’t members of any white supremacist organization or anything,” he said. “Just about everybody in Mobile at that time during the ’50s and ’60s when I was growing up, used the N-word. It was kind of common then. Matter of fact it was uncommon to hear anybody use the word Negro.”

His mother’s side of the family was from Germany. As a boy, when Franklin discovered photographs of his German relatives wearing swastika armbands during World War II, he was hooked. “I thought, hey, this is something my family is into,” Franklin said.

He joined the American Nazi Party in 1967, the same year Rockwell was assassinated by a disgruntled follower, sending in the $2 membership fee. He was 17.

“The party at that time was fairly strong,” Franklin said. “They just began integrating the schools and I think a lot of the organizations at that time were at their peak — United Klans of America, American Nazi Party, National States’ Rights Party. A lot of people were scared of integration and began joining those organizations.”

At one time or another, Franklin says he belonged to all three.

But his heart always belonged to the Führer. In 1976, Franklin changed his name to Joseph Paul Franklin, taking “Joseph Paul” from Adolf Hitler’s minister of propaganda, Joseph Paul Goebbels, and “Franklin” from American icon Benjamin Franklin.

A year later, the killing began with a young interracial couple in Madison, Wisc., who Franklin happened to encounter in a mall parking lot.

“I’m just trusting in the Lord’s mercy,” Franklin told Hatewatch. “He tells us right there in the Scriptures that those who obey him will enter into his rest and receive eternal life.”

Moments later, an automated voice interrupted Franklin, informing him he had one minute left on the monitored prison telephone.

Then, 60 seconds later, the automated voice was back and said, “Goodbye.”

The call was over.

Joseph Paul Franklin had run out of time.