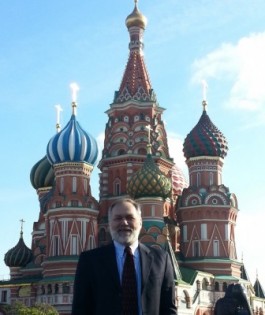 Scott Lively, the virulently anti-LGBT activist currently being sued for human rights violations regarding his role in the notorious anti-gay bill in Uganda, is in Russia this week participating in a planning committee meeting of the World Congress of Families (WCF), which was held October 15-17 in Moscow.

Since 1997, the WCF has held a gathering of right-wing groups in major cities around the world every two years (though more recently, they’ve been meeting once a year). The WCF met this past May in Sydney, Australia. The group’s 2014 conference is scheduled for September in Moscow. Opening ceremonies are slated for the Kremlin.

This isn’t the first time Lively has gone to Russia. He did an extensive tour beginning in the fall of 2006, in which he claims he met with religious officials and scholars. In a recent interview, Lively took some credit for Russia’s passage of a bill that bans “homosexual propaganda.” Since the passage of the bill, violence against LGBT people in the country appears to have increased. In a September interview with the viciously anti-LGBT  Bryan Fischer of the American Family Association, Lively claimed that the passage of the Russian law was “one of the proudest achievements of my career.”

Lively blogged his latest travels Oct. 18 on his site, and also stated that he met with and did a television show with Russian Orthodox archpriest Dmitri Smirnov, who Lively referred to as head of the Patriarch’s Commission on the Family. The Patriarch, in Orthodox tradition, is equivalent to the Pope. The current Patriarch, Kirill I of Moscow, recently declared gay marriage a “dangerous apocalyptic symptom.”

Lively contended that Smirnov is “very receptive” to his latest plan, which he’s calling “The Rainbow Belongs to God Strategy.” Lively wants Russia to reclaim the rainbow for God by flying a rainbow flag over the 2014 Olympics in Sochi and allow rainbows to appear everywhere at the Games, thus somehow blunting their use as a symbol of LGBT pride and unity. “With a simple judo move,” Lively says, “the Russians could catch the ‘gays’ in their own trap, and at the same time rescue God’s rainbow from being dragged in the mud.”

Lively developed his plan in response to a report by fellow anti-LGBT activist Brian Camenker, head of the anti-gay group Mass Resistance. Camenker claims he “infiltrated” the National Gay and Lesbian Journalists Association conference, held in Boston in August, and uncovered a “plot” in which LGBT people and allies will smuggle rainbow flags into the 2014 Olympics in Sochi to wave in defiance of Russia’s ban on gay “propaganda.” Lively wants Russia to thwart “this evil plan” by reclaiming the rainbow as a symbol of God.

Continuing on his blog, Lively claims that Smirnov offered to help him find a Russian publisher for his discredited book The Pink Swastika, an anti-LGBT Holocaust revisionist piece that claims the Nazi Party was full of gay men who ultimately orchestrated the Holocaust. Lively plans to donate half of the earnings from sales of his book in Russia to the pro-family movement in that country.

It probably shouldn’t come as a surprise that Lively is working with the WCF. The group has a history of working closely with anti-LGBT organizations around the world. The WCF, a project of the Howard Center for Family, Religion & Society based in Rockford, Ill., bills itself as “an international network of pro-family organizations, scholars, leaders and people of goodwill” that seeks to “restore the natural family as the fundamental social unit and the ‘seedbed’ of civil society.” The WCF holds meetings roughly annually in major cities around the world, where American anti-LGBT groups interact with like-minded organizations overseas.

Earlier this year, Larry Jacobs, managing director of the WCF, applauded the passage of Russia’s anti-gay propaganda law, and the WCF more recently took credit for stopping an LGBT pride parade in Belgrade. The group also arranged for Brian Brown, president of the anti-gay National Organization for Marriage, to address a committee of the Russian parliament in June in support of barring same-sex couples from adopting children. Brown said in his speech (translated into Russian then back to English) that, “We will band together, we will defend our children and their normal civil rights. Every child should have the right to normal parents: a mother and a father.” Brown accompanied a delegation of five French anti-gay activists, including Fabrice Sorlin, head of the far-right French Nationalist group Dies Irae, which has been accused of racist and anti-Semitic behavior. Sorlin was also once a candidate for the far-right National Front party.

Russia has become a rallying point for the international anti-LGBT movement because of its recent passage of anti-gay laws. The WCF is working hard to try to get more “homosexual propaganda” laws passed in countries overseas and to stymie any recognition of LGBT rights (their latest target is the Ukraine).

Clearly, for LGBT people, the message that Lively, Brown, and the WCF are spreading is definitely not “From Russia with Love.”