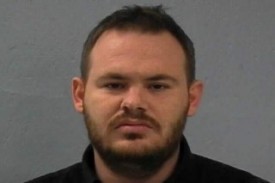 A suspect arrested this month for twice attempting to burn down a Joplin, Mo., Planned Parenthood clinic now has been implicated in last year’s firebombing that destroyed a mosque in the same community.

Jedediah Stout, 29, an Iraq war veteran who described himself as “sort of homeless,” was charged last week in U.S. District Court in the Western District of Missouri with attempted arson of a building used in interstate commerce. He is being held without bond as a flight risk and danger to the community.

Stout was arrested by police on Oct. 4 walking on railroad tracks in Joplin, just a few blocks from a Planned Parenthood clinic where someone attempted to throw burning backpacks on the roof of the building two days in a row, court documents say.

After admitting involvement in those arson attempts, the defendant “confessed to setting fires at the Islamic Society of Joplin’s building on July 4, 2012, and on Aug. 7, 2012,” a motion for the suspect’s detention says. The mosque was completely destroyed in the second attempt.

Stout is a U.S. Army veteran who served as a combat engineer from October 2002 to July 2005, and was deployed to Iraq for a year beginning in September 2003, the Los Angeles Times reported in yesterday’s editions.

On social media sites, Stout identifies himself “as a politically conservative Christian and a struggling veteran,” the newspaper reported.

Stout has not yet been charged with the arson of the mosque or a hate crime, but additional formal charges are expected to be contained in a federal indictment after the case is presented to a grand jury.

Federal investigators previously said the mosque arson appeared to be a hate crime, but they were without suspects until Stout was arrested. That occurred after an employee of Planned Parenthood arrived for work about 6 p.m. on Oct. 3, parking at the rear entrance. Exiting her vehicle, the employee “noticed an object located on the roof of the facility and a partially burned piece of material located on the ground nearby,” court documents say.

Police and FBI agents later found a plastic bottle containing a suspected flammable liquid and a partially burned backpack tied to a camouflage-colored rope, covered with a plastic sleeve. Stout’s fingerprints later were found on the plastic bottle.

A day later, shortly before midnight on Oct. 4, a second similar attempt to firebomb the clinic was captured on surveillance cameras, but the object thrown on the roof was completely burned. A short time after that fire was reported, Joplin police stopped and arrested Stout for trespassing as he walked along railroad tracks about five blocks from the scene.

FBI agents, using grand jury subpoenas, subsequently obtained surveillance camera footage and sales-receipt records from a Wal-Mart store in Joplin, tying Stout to the Oct. 1 purchase of a backpack matching the UPC Code of the backpack recovered from the roof of the Planned Parenthood facility, court documents say.

The suspect confessed to the mosque arson a day after his arrest, the documents say.

Imam Lahmuddin of the Islamic Society of Joplin told the Los Angeles Times that he was relieved after the confession. “At this point, we are grateful that law enforcement has been able to arrest him, and at least this will stop him from continuing what he had been doing," Lahmuddin told the newspaper.

The Islamic Society has raised $600,000 and is now finalizing plans for a new mosque in Joplin, Lahmuddin said.

“We always feel welcome here,” Lahmuddin told the newspaper. “As you can see, the reaction of the community … after the fire, they’re very supportive and encouraged us to rebuild in Joplin.”