Virginia Congressman Randy Forbes is back in the news. We last wrote about Forbes in October when he was set to fundraise for an anti-gay hate group, the American Family Association (AFA). Now he’s pushing to deny money to gay Republican candidates for Congress – because they’re gay. Unfortunately for Forbes, his anti-gay bigotry is undercutting his effort to become chair of the powerful House Armed Services Committee.

Austin Wright and Jake Sherman at Politico report that Forbes “is causing friction with some of his colleagues” by waging a “lengthy crusade to convince his colleagues and the National Republican Congressional Committee” to not support two promising, but openly gay, candidates. Those candidates are Richard Tisei in Massachusetts, who narrowly lost in 2012, and Carl DeMaio in San Diego. 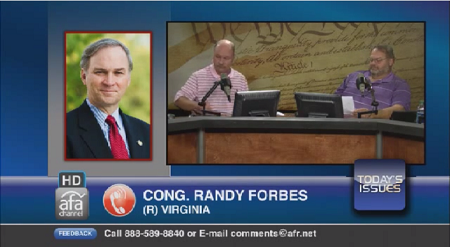 Forbes was set to headline a fundraiser for the AFA in October but skipped it at the last minute. His decision was no doubt helped along by Faithful America’s ad campaign in his district.

We were hopeful that his decision to skip the hate group event signaled a shift away from anti-gay bigotry. We were wrong.

Forbes, sadly, has a long track record of bigotry, and his latest efforts fit nicely into a career of denying civil rights to LGBT Americans. As Zack Ford points out at ThinkProgress, he argued in 2007 that the Employment Non-Discrimination Act, which would prevent LGBT Americans from being fired for their sexual orientation, would “destroy the institution of marriage.” He also supports a constitutional amendment to overturn state laws allowing same-sex marriage and introduced legislation that would allow businesses with a religious affiliation to discriminate on the basis of sexual orientation.

As we’ve noted in the past, Forbes has worked closely with the AFA and appeared numerous times on its radio shows, including with Tony Perkins and homophobe-in-chief Bryan Fischer. One of the first videos on his official YouTube channel, posted in 2008, is an AFA special called the “War on God.”

Forbes’ close relationship with the AFA renders him unfit to chair the committee that oversees America’s modern military. After all, this is a group whose chief spokesperson and head of public policy – Bryan Fischer – argues that we must “bring to an end the practice of putting women in the military” and “stop the practice of allowing Muslims to serve in the U.S. military.” Fischer also wants to ban gays. What’s more, he actually appears to believe that the military is being trained to use “lethal force” against Christians. His overall thesis is that President Obama is intentionally weakening the military by “feminizing” it and driving out veteran generals and Christians.

Forbes can’t be held responsible for every bigoted thing that comes out of Fischer’s mouth, but he has gone out of his way to work with the AFA – more than perhaps any other member of Congress. He has made it clear that he will use every bit of leverage he has to undermine equal rights. He has no place dictating policy for our military.