State Sen. Dan Claitor, a Baton Rouge Republican, threw his name into the race for Louisiana’s 6th Congressional district this week. That’s the same district that Tony Perkins has been openly coveting. Perkins, of course, is head of the Family Research Council, an anti-gay hate group.

It wasn’t by coincidence, then, that Claitor expressed concern about another potential candidate who has “questionable associations with certain hate groups.” As Lauren McGaughy reported in the Times-Picayune, Claitor also likened Perkins to former Louisiana state legislator and KKK Imperial Wizard David Duke and cautioned that he doesn’t want the state to “become the focus of the national media because we have extremists running for a particular office.”

The reference to Duke is an interesting one. Perkins, to be sure, is no David Duke. But he did purchase Duke’s supporter list in 1996 and then tried unsuccessfully to cover it up. He was later fined by the Federal Elections Commission.

Then in 2001, Perkins was photographed addressing a gathering of the white supremacist Council of Conservative Citizens. The group, a direct descendent of the segregationist White Citizens Councils of the 1950s and 1960s, has called African Americans a “retrograde species of humanity.” Perkins, who later denied knowledge of the group’s racist views, spoke in front of a Confederate flag (seen here, courtesy of Right Wing Watch): 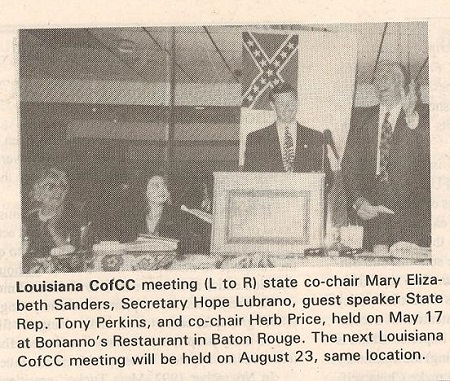 The following year, Perkins ran for the U.S. Senate and finished in fourth place in the Republican primary with just 9% of the vote. Perkins apparently believes that his years spent at the helm of the FRC will put him in better position. He may be right, but he’s also established himself as an anti-gay hardliner at a time when the country is moving toward moderation and acceptance. As we’ve detailed, Perkins and the FRC are viciously anti-gay and falsely link pedophilia and homosexuality to portray gays as sexual predators.

Perkins spends most of his time in D.C., but he has worked to create the impression that he still lives in Baton Rouge. Governor Bobby Jindal recently appointed Perkins to serve on the Louisiana Commission on Law Enforcement. He managed to land the nomination despite not bothering to show up for the other commission he sits on – the Commission on Marriage and Family, no less!

It’s encouraging that Perkins’ record of extremism is drawing scrutiny even before he enters the race. He’s going to find, if he hasn’t already, that attacking gays is no longer a form of career advancement.

I’m reminded of something Perkins once said about the “It Gets Better” series of videos. In his words, the videos are “aimed at persuading kids that although they'll face struggles and perhaps bullying for 'coming out' as homosexual (or transgendered or some other perversion), life will get better.” He derided that mission as “disgusting” and part of a “concerted effort” to “recruit them into that lifestyle.”

What must have upset him so is that the corollary is also true. For anti-gay dead-enders like Perkins, it gets worse.