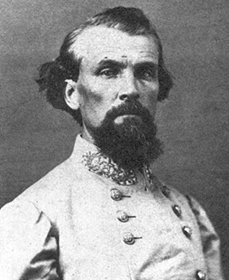 Forty-three years after it was integrated by court order, Nathan Bedford Forrest High School in Jacksonville, Fla., will drop the name of the Confederate general who ran an infamous antebellum slaveyard, presided over the massacre of surrendering black Yankee troops, and was the first national leader of the Ku Klux Klan.

It was a long time coming.

Initial efforts to change the name of the school, whose student body is now 61% black, were made in the early 1990s but failed. A second attempt, led by local sociology professor Lance Stoll and a few of his students, also failed in 2007, even though Stoll surveyed the local community and jumped through a series of hoops imposed by the school board. The board defied its own policies then, with members voting 5-2 along racial lines to keep the name of the infamous Confederate.

But this Monday, culminating the largest campaign yet, the board, all of whose members but one are new since 2007, voted unanimously to select a new name before August 2014. Schools Superintendent Nikolai Vitti, who supported the change from the beginning, said it could end a “cloud of divisiveness” and would now “allow us to focus on what matters most — student achievement.”

“We recognize that we cannot and are not seeking to erase history,” Duval County School Board member Constance Hall said. “For too long and too many, this name has represented the opposite of unity, respect and equality — all that we expect in Duval schools. Our board has [been] and is guided by a set of core values that promote equal opportunity, honors differences, and values diversity.”

Stoll said he was glad for the change but still amazed at the stiff defense of the name put up by many locals. “Their argument was so shallow and so ridiculous,” he told Hatewatch. “You can’t defend Nathan Bedford Forrest. He was a miserable, despicable human being. And the Confederacy was a horrible place. Why do we allow our schools to be named after treasonous people? It’s just amazing.”

It wasn’t easy. In addition to Stoll, a key player this time was Otomayo Richmond, who started a national petition on the Change.org website that eventually garnered some 160,000 signatures. The local NAACP, the Southern Christian Leadership Conference, the local Democratic Party, several unions and others worked hard to press the campaign forward, Stoll said. “In 2007, it was me and two or three students,” he said. “This time, we had a broad coalition and the social media. I think the people running Jacksonville today don’t want to be a redneck town any more.”

In recent surveys, 94% of the school’s alumni opposed changing the name. But 64% of students supported the change, as did Vitti and, ultimately, all members of the multiracial board. By a small margin, the local community also backed a change.

Still, it was an uphill battle that may have turned on a single moment about six weeks ago. “Every board member received a letter from the grand wizard of the Ku Klux Klan of Missouri,” Stoll said. “Even the most conservative people on the school board said they were horrified. That was the best thing that happened.”