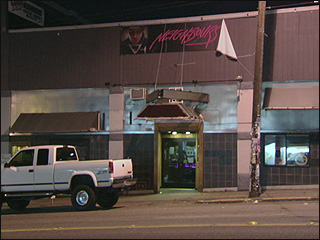 A horrific tragedy in which hundreds could have died was narrowly averted in Seattle on New Year’s Eve, stopped by patrons of an iconic gay bar who managed to extinguish a raging arson fire at the bar’s entrance before the flames spread. Now Seattle police are investigating the case as a possible hate crime, although they say that so far there is no evidence that it was one beyond the fact that gay people appear to have been targeted.

The fact that the bar was a famous Capitol Hill nightclub called Neighbours immediately raised suspicions in Seattle. In 1990, the same establishment was targeted by a group of neo-Nazis from Idaho who plotted a bombing attack there intended to kill large numbers of people.

The New Year’s Eve arson was thwarted by the swift action of a patron who found the stairway into Neighbours engulfed in flames shortly after midnight. The patron grabbed a fire extinguisher and managed to douse the worst of the flames; at about the same time, someone pulled a fire alarm and set off the building’s sprinkler system. Everyone managed to evacuate the building safely, and the damage caused by the flames and the water was relatively minor.

At the time, the building was packed with over 750 people celebrating the new year. There were two other exits out the front of the building, but structure itself is an aging wooden building through which flames would have spread rapidly. Even with the fire out, patrons at the scene reported that there was a brief panic as hundreds tried to flee through the remaining doors.

Police found a can of gasoline in the stairwell they believe was used to spread fuel and set the fire.

"A minute more and you could've had disaster," said patron Shaun Kinttel, who runs Social Outreach Seattle and is a regular at Neighbours. He recorded video of the discovery of the liter of gasoline at the top of the staircase.

“It’s still early in the investigation and detectives are still gathering evidence,” said Seattle Police spokesperson Renee Witt, who also noted that so far, there is no evidence that the attack was a bias crime beyond the fact that a large gathering of gay people appears to have been targeted. “If they do find evidence that it was a hate crime, then it will be referred to the detective in our bias-crime unit.”

In 1990, several members of the neo-Nazi Aryan Nations organization from Hayden Lake in northern Idaho were arrested and charged with plotting to kill dozens, if not hundreds, of Neighbours patrons. They had traveled to Seattle intent on reigniting a 1983-84 campaign of domestic terrorism carried out by another Aryan Nations-derived group, The Order, against their perceived enemies: Jews, African Americans, and gay men and lesbians. But the attackers in 1990 included an FBI informant named Rico Valentino.

Their first target, they had decided, would be Neighbours, at the time one of the largest gay clubs in the city. They tested a pipe bomb in the Idaho woods and were impressed by its explosive power. Had it gone off in the middle of a crowded room — Neighbours was then known to pack in several hundred on weekend nights — the place “would resemble a meat grinder,” according to their own assessment. They worked out a “kill zone” strategy in which the explosives would be placed inside the bar, with other bombs placed outside it. Their plan was to call the bar, warn that a bomb was about to go off, and then set off the secondary charges as the disco cleared out, maximizing the number of fatalities.

On May 12, 1990, a trio of “Aryans” — Valentino, Robert John Winslow and Stephen E. Nelson, the Aryan Nations security chief — drove together to Seattle in a van stocked with pipe-bomb parts, a .12-gauge shotgun, a .38-caliber revolver, a stun gun, knives and a pile of hate literature. But as they got out of the van to check into a motel near the Seattle airport, the FBI moved in and arrested the men, except for Valentino, who had orchestrated the arrests. In Hayden Lake, they arrested another member of the group at his home: Procter James Baker, 58, an Aryan Nations regular.

Winslow, Nelson and Baker went to jail, while Valentino went into protective hiding to await the trial as the chief witness in the case. In October, after 10 days of testimony, a Boise jury convicted all three on conspiracy, bomb-possession and firearms charges. They were sentenced to a range of prison terms, with Nelson getting the longest, a 25-year sentence. Baker served two years of his 10-year term before being released on probation.

Given that history, it’s no surprise that this week’s arson set off concerns among members of Seattle’s gay community who remembered the earlier incident. “We still don’t know if it was someone who was just a jealous lover or a disgruntled employee, which is always possible,” said George Bakan, editor of Seattle Gay News. “But I think a lot of people suspect a real malicious intent here, especially given that gay rights have been in the news here so much in the past year.” (Washington voters approved an initiative legalizing gay marriage in the 2012 election, and the state attracted a large number of LGBT couples seeking marriage licenses in 2013.)

Seattle police are simply grateful that there wasn’t a tragedy. “It was just a great thing that people acted as fast as they did to put out the fire,” said police spokesperson Witt. “We could have had mass, mass casualties, and we’re very lucky that that didn’t happen.”