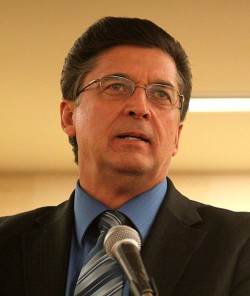 Richard Mack, the “constitutionalist” sheriff who has been one of the leading promoters of the concept of “nullification” of federal laws by state and county authorities in recent years, stepped into the battle over same-sex marriage in Utah this weekend. Mack headlined a gathering of like-minded law-enforcement officers and declared that it was time for an “uprising against gay marriage” after a series of federal court rulings opened the door to same-sex unions in the state.

"The people of Utah have rights, too, not just the homosexuals. The homosexuals are shoving their agenda down our throats," he told the audience of about 200 people in suburban Highland on Saturday. The meeting was co-sponsored by Mack’s Constitutional Sheriffs and Peace Officers Association (CSPOA) and a local radio station.

Mack has long promoted the notion, derived from the far-right “Posse Comitatus” movement of the 1970s and ‘80s, that county sheriffs are the supreme law of the land, capable of trumping federal law. This concept played a central role in Mack’s arguments this weekend, as he vigorously denied that the Constitution’s “Supremacy Clause” gives federal authorities power over local jurisdictions.

"The way you take back freedom in America is one county at a time. The sheriffs need to defend the county clerks in saying, 'No, we're not going to issue marriage licenses to homosexuals.’"

Mack was joined onstage by even more radical “constitutionalists,” including a well-known speaker on the “constitutionalist” circuit named Joe Wolverton, who has previously distinguished himself by calling the Supreme Court ruling upholding the so-called Obamacare health-care reforms the “bleak dawn of a brave new world in which the federal government cannot be checked in its march toward totalitarianism.” Wolverton’s inflammatory rhetoric included talk of secession and accusations of “treason” by state and local officials.

Wolverton told the crowd that the federal government violates its “contract” with the states daily, so they in turn have the right to rescind it. "We are absolutely within our right to secede from a political union that no longer answers to the demands of liberty and justice," he said.

He also accused elected officials of treason: "Have we elected traitors? Yes we have, absolutely,” he said. “Both parties continue to grow the federal government and burden the states and the people."

Mack has been touring the country promoting various issues in line with his “nullification” scheme. He’s scheduled to be the keynote speaker at a conservative Maryland organization’s annual banquet later this week.

Mack first made a name for himself in far-right circles in the 1990s, when, as the sheriff of a rural Arizona county, he successfully challenged part of the so-called Brady Bill gun-control legislation before the Supreme Court. Shortly afterward, he began touring the country promoting the concept of militias and various Posse-style conspiracy theories, including the notion of county supremacy.

More recently, he has become closely associated with the conspiracy-minded Oath Keepers organization, including their recent efforts on behalf of a Florida sheriff accused of malfeasance by state officials – and eventually acquitted – after he effectively “nullified” state conceal-carry laws for a local citizen. Mack’s activities promoting “nullification” have played a key role in the recent resurgence in militia-organizing efforts as well.

He evidently found a receptive audience in Utah. "There are a lot of people who are upset about this," said Cherilyn Eagar, a local conservative activist who helped organize the gathering. "It's really up to we the people at this point. Our governor is not with us on this. We have a state legislature that won't even call a special session. Our federal delegation has been silent about this."

Eagar told the Deseret News that state officials should tell the federal government that they won’t enforce the recent court rulings, because they have the power to do so. Mack also told the audience that the Constitution only protects the rights endowed by God in the Bible.

"You're never going to convince us that homosexual marriage is one of those innate, God-given rights. It's not," he said. "If you read the Bible, you will plainly and simply see that it's not."