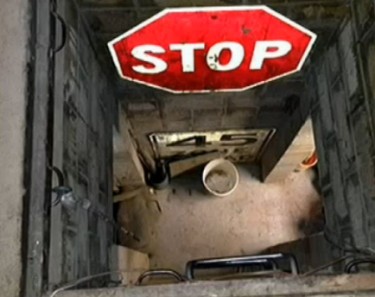 Three men were arrested earlier this week after Los Angeles County sheriff’s deputies uncovered a secret bunker hidden under a house that was filled with guns, ammunition and white supremacist paraphernalia in Littlerock, Calif., about 65 miles northeast of Los Angeles.

Inside the soundproof underground bunker, investigators found a 25-yard shooting range, six pistols, 11 rifles, a World War II-era machine gun, more than 1,000 rounds of ammunition, over 100 magazines (some high-capacity), Nazi flags and pictures of at least one of the men posing in Nazi attire. Some of the weapons, like the machine gun, were illegal, and others were stolen, authorities said.

"It’s not something that anybody we’ve ever worked with has seen in their careers in law enforcement,” Sheriff’s Det. Julia Vezina told an NBC affiliate in Los Angeles. "When you open up the hatch, you look down and about 10 feet down, all concrete reinforced walls, soundproof with bars.”

Police took three men into custody after the Jan. 8 discovery: Royce Gresham, 33, Todd Hunt, 54, and Larry Finnell, 62, who lived in the house where the bunker was discovered. The men were charged with weapons violations and were to be arraigned at the Antelope Valley courthouse.

Deputies began their investigation last month after four guns were stolen from a storage unit in Palmdale. The information they gathered led them to the three men earlier this week.

While no evidence has yet emerged that the men were part of any hate group, at least one neighbor had noticed one of the men’s radical beliefs. "Larry was a survivalist,” Dale Snide, who lived next door to Finnell, told NBC4. “He's concerned about the direction our government is going now.”

Lisa Waldron, 50, who lives with Finnell, claimed to Hatewatch that none of the men are tied up with Nazis or hate ideologies. She said that the bunker was well known, and that the police had raided it before. “It’s a workshop. It’s not a bomb shelter,” Waldron said. “You’re lucky if you’re a stick man and you’re able to get down there and look at the range. It’s a crawl hole.”