Just ask Jeff Crockett, the mayor of Harrison, Ark., a small, 95 percent white city haunted by the ghosts of century-old race riots and a current day Ku Klux Klan compound in the Ozarks just 15 miles outside of town. 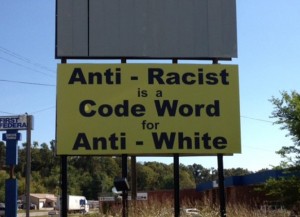 “Our Internet presence is terrible,” the mayor told Hatewatch today. “When people Google Harrison, Ark., the first page of websites is Klan-related. People don’t come here because of it.”

There’s a Fed Ex regional office in Harrison that employs 1,500 people from across the region.

“We’re finding people who transfer in here, even if they’re white they don’t want to raise their kids around that [Klan history],” he said. “Then they decide to move to Branson, Mo., and drive 30 miles back and forth. So we lose the tax base, we lose the real estate sales. We’ve been working hard to combat that and get a better reputation out.”

It has not been easy, especially in the last few months. The battle over Harrison’s reputation has been waged these days not house to house but billboard by billboard, with acts of vandalism, an arrest, leaks to the Klan and most recently a mayoral investigation.

It started last fall, when someone put up a billboard proclaiming, “Anti-Racist is a Code Word for Anti-White,” a popular mantra among white supremacists.

A few weeks later, around midnight on Thanksgiving, the sign was vandalized. Someone painted over the “Anti-White” and replaced the phrase with one word: Love.

The vandalized sign read, “Anti-Racism is a Code Word for Love.”

Last month, a local 47-year-old handyman named Chad Watkins was arrested for painting over the sign. But before his name was released to the public, his lawyer, Matthew Campbell, said Watkins’ name was apparently leaked to the Knights of the Ku Klux Klan, which has a compound 15 miles from Harrison.

Campbell said his client has not been threatened since his name became public. His trial is scheduled for March 26 in Boone County District Court.

Campbell said he asked three police officer friends from out of town to attend the trial “off-duty, just in case.” One of the officers was black and told Campbell, “I love you man, but no, I’m not going to Harrison.”

“And this was an old, veteran cop who shouldn’t be worried – and even he won’t go to Harrison,” Campbell said.

Such is the hard-to-die reputation of Harrison.

Campbell added that, contrary to Internet chatter, he never said or implied that Harrison Police Chief Pat Murphy was forced to resign because of the leak. The chief is scheduled to retire on Jan. 31, but it has nothing to do with the leak, the mayor said. “Absolutely nothing,” Crockett said.

The chief had hip surgery in the fall, and two days later suffered a heart attack. “He has a disabled wife, who he is the sole provider for,” the mayor said. “And she can’t care for him, he has to care for her. After much deliberation he decided it would best if he resigned.”

Crockett and the chief are both members of the Harrison Community Task Force on Race Relations, a 10-year-old group of local officials and residents that seeks to improve race relations and understanding in the city of about 13,000 people, a population that includes just 34 African Americans.

No one seems to know who put up the “Anti-Racist is a Code Word for Anti-White” billboard. But a few weeks after it went up, the Task Force on Race Relations unveiled two billboards of its own. “Love Your Neighbor,” the billboards implore, with a quote from Dr. Martin Luther King Jr. underneath: “Hate cannot drive out hate; only love can do that.”

Patty Methvin, president of the chamber of commerce in Harrison and the facilitator of the Task Force, said the billboard that started the brouhaha prompted a flood of callers from concerned citizens. “There was a huge outcry when it went up,” Methvin said. “People were very upset about it. The perception of Harrison is that we would just sit back and think that was funny and nobody would care. But many, many people cared about that sign – a lot.”

As for vandalizing the sign and painting in the word Love, Methvin said, “we don’t condone illegal acts.”

“But we did think that the message once it was changed probably resonated better with the community of Harrison,” she said. “When it says anti-racism equals love, that’s a better fit for our community about how people feel.”

The vandalized sign was taken down, restored and put back up.

Still, it is outnumbered two-to-one by the Task Force billboards.