A Louisiana-based faction of the neo-Nazi Aryan Nations, headed by a man with his own checkered criminal past, has severed its ties in a rather public, name-calling way with an Illinois-based motorcycle club, the Sadistic Souls, headed by a former Ku Klux Klan leader.

Morris L. Gulett, the Louisiana man who calls himself “Aryan Nations World Leader,” accused the Sadistic Souls Motorcycle Club and its president, Dennis “SS Lightnin'” McGiffen, of being “drunks and race-mixers” who do little more than post pictures of themselves on social media with their middle fingers raised. 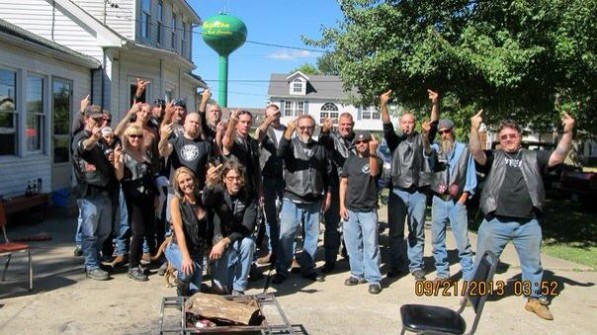 Not one to hold back, McGiffen responded with his own Internet posting late last year, calling Gulett a “rabbi,” a “costume Nazi” and a “worthless welfare king” deserving of the “Sadistic Souls MC A------ of the Year 2014” award. McGiffen’s posting comes complete with an obscene Photoshopped image of Gulett appearing in a body orifice of an African-American woman.

The tumultuous marriage between Gulett’s white supremacy organization and the equally racist Sadistic Souls MC lasted less than two years — yet another example of strife and infighting between various splinter remnants of the Aryan Nations that developed after the 2004 death of Aryan Nations founder Richard G. Butler.

In the 1990s, the Aryans Nations was perhaps America’s most visible neo-Nazi group, but it started to fall apart after the Southern Poverty Law Center sued it in 1999, winning a $6.3 million judgment the following year for its clients, who had been terrorized by Aryan Nations security guards. Since Butler’s death, a range of former members have claimed to be his rightful heir as Aryan Nations chieftain, but none has succeeded in bringing the group back to prominence, and most spend the bulk of their energies attacking one another as undeserving pretenders and worse.

The latest spat between would-be Aryan Nations leaders was typical of the kind of endless, sophomoric invective and internecine battles that characterize enormous swaths of the American radical right. 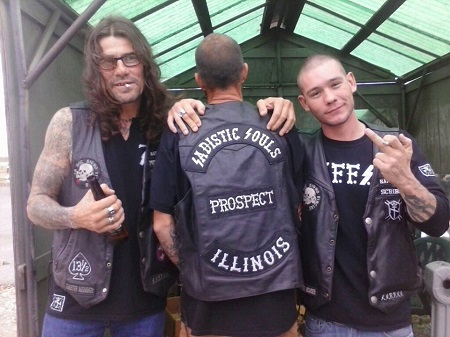 Before becoming a so-called outlaw biker, McGiffen was a grand dragon in the Ku Klux Klan. He left the Klan, calling it “wimpy,” to form a racist-based group, The New Order, in the mid-1990s; it was named after The Order, an infamous white supremacist domestic terrorist group that was destroyed by law enforcement in 1984. But before McGiffen’s group could carry out its plans — to blow up buildings, poison the water supply of major cities, murder a federal judge and other people, and rob banks and armored cars — he was arrested on federal weapons charges and sent to prison for eight years. Investigators found a New Order hit list that included filmmaker Steven Spielberg, then-Federal Reserve Chairman Alan Greenspan, and Southern Poverty Law Center co-founder Morris Dees.

Gulett’s rap sheet is just as serious. He was arrested in 2005 and went to prison for six years after pleading guilty to conspiracy to rob a bank. Court documents say his earlier crimes included shoplifting, aggravated assault, unauthorized use of a motor vehicle, possession of drugs, receiving stolen property and homicide.

With their common criminal histories and shared racist views, Gulett and McGiffen sounded like a logical tag-team when they hooked up in 2012. And at first, they indeed seemed to make a match.

Almost immediately, Gulett posted pictures of McGiffen and his beer-guzzling bikers on his Aryan Nations website, appointed McGiffen a “general” on the Aryan Nations National Advisory Council, and described him as one of the great racist leaders of the day.

Now, things have turned downright nasty between the two.

In a posting on his website, Gulett wrote that he was “again saddled with another unpleasant task” — publicly distancing himself from the Sadistic Souls and McGiffen. “What is it about Aryan Nations that attracts the lowest of the low that think they are qualified to lead this organization and know what's best for Aryan Nations?” Gulett asked. He accused McGiffen and his fellow bikers of attempting to “hijack the Aryan Nations or at least its name and use it for their own nefarious purposes.”

“Let me make this perfectly clear,” Gulett writes. “These guys are NOT Aryan Nations members.”

It was McGiffen, Gulett wrote, who approached him in 2012 “wanting to merge his club with Aryan Nations since he claimed that his club’s by-laws and goals were pretty much the same as Aryan Nations and National Socialist in nature.”

Gulett now says he had some misgivings when he initially agreed to the merger with the motorcycle club, which is based in East St. Louis and has “patched” members from Illinois, Pennsylvania and Utah. “We were not thrilled about the name ‘Sadistic Souls’ because to start with Aryan Nations is a Christian organization and that name just did not seem to fit,” Gulett said. “But we thought we'd give it a shot and if it looked like it was going to work we could collaborate on a name change at a later date.”

With a shared loved of white supremacy, the relationship went “pretty smoothly” initially. But the bikers weren’t interested in complying with the “military-style” dress code of the Aryan Nations, Gulett said.

"The guys from the motorcycle club wanted to just wear their vests and jeans as their uniform,” Gulett complained, “plus they seemed to want to spend a lot of time drinking beer, posting photos of themselves on social networks such as Facebook wearing the Aryan Nations standard on their vests, flipping the bird and using four letter words that are unsuitable for any Aryan's conversation.”

“These guys wanted to act like common ghetto n------ and that was supposed to be alright? Well it wasn't,” Gulett wrote in a racist tirade against his former comrades.

The final straw came, Gulett said, when he learned that McGiffen’s daughter has

African Americans as “friends” on her Facebook page and that his son, Sadistic Souls member Damien M. McGiffen, is the father of a multiracial son. Gulett attempts to back his allegations – not refuted by either of the McGiffens – with Facebook photos of the little boy and court documents related to paternity support.

“Notice the boy is named after his father and grandfather,” Gulett sneers, “so you know the McGiffens are a proud multi-racial family.”

“Don't you think they are a fine Aryan family and the Sadistic Souls MC is a fine White Nationalist Aryan Motorcycle Club? You don't agree? Well neither do we, we don't agree at all. If it stinks like hell it just might be a skunk,” Gulett said.

Dennis McGiffen responded: “Once again, rabbi Gullette [sic] loves to run his p----fied [sic] neck. Maybe it's because his congress was a complete failure and he has no membership (no dues paying members anyway — all 10).”

Maybe Gullet is “salty over his complete incompetence and failure as a leader in our struggle or maybe it's just because he's an idiot who believes he's some kind of savior,” he added. “Whatever the case may be, if he'd spend more time fighting the enemy instead of pissing on every white power order out there (always behind a computer in the comfort of mommys home), just maybe we could even take him serious! But a joke is a joke and at the forefront of this joke” is Gulett, McGiffen said.

Under his leadership, the Sadistic Souls annual gathering in Illinois last September “was a huge success with near 100 brothers coming together under the black and silver standard of our beloved Aryan Nation,” McGiffen said.

“Our men are solid and proven unlike the paper tiger in Louisiana,” McGiffen said, adding that all “white brothers with the mentality of separation” can join the Sadistic Souls, even if they don’t have a motorcycle.

“We welcome all our racial brothers, and by the way Rabbi Morris Gullette [sic], we do 'drink beer, cuss & flip the bird,' so go f--- yourself!” McGiffen said.