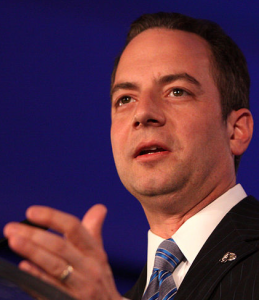 Republican National Committee chair Reince Priebus fired off a memo and letter to MSNBC today announcing a boycott of the network by all RNC staff and surrogates. Priebus seized upon a tweet sent out by MSNBC yesterday that taunted conservatives by suggesting they would hate a new Cheerios ad featuring a biracial family. The ad generated a racist backlash online when it first ran last year.

MSNBC has deleted the tweet and apologized, but Priebus says there has been a “troubling streak” of “comments that belittle and demean Americans without furthering any thoughtful dialogue.” He is promising to boycott until the head of MSNBC personally apologizes and takes “corrective action.”

This seems like a good time to remind Priebus that he appeared – not quite three weeks ago – on a hate radio network, American Family Radio. The network is run by an anti-LGBT hate group – the American Family Association – whose spokesperson Bryan Fischer makes a sport of attacking women, Muslims and LGBT people on his show. He wants them removed from the military and public office. He’s also said that Hispanics are “socialists by nature” who “plunder of the wealth of the United States” and that African-American women “rut like rabbits” to get more welfare money.

Perkins’ group has argued that homosexuality should be outlawed and that LGBT people are more likely to engage in pedophilia and domestic violence. Perkins himself has a long record of anti-gay bigotry and has been caught working with extreme racists in the past. 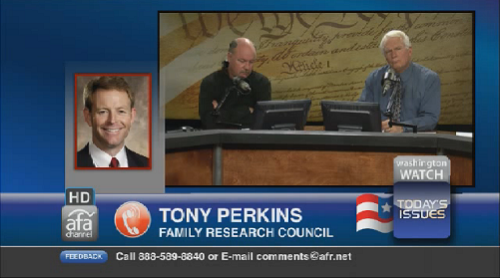 Perkins discusses his new show with Bryan Fischer in January 2013

Just the same, Perkins and Priebus had a friendly chat on Jan. 10 about the GOP and social issues. Perkins said that despite “some differences” they “have a good working relationship.” He went on to praise Priebus for taking “corrective actions, and some pretty aggressive actions” to make sure that people like himself are “very much in the mix at the RNC.”

This is why Priebus’ much-discussed effort to “reboot” the GOP has failed – nothing has changed. If Priebus is serious about not working with outlets that “belittle and demean Americans,” the first “corrective action” he can take is announcing a boycott of American Family Radio and other hate outlets.

UPDATE: Priebus called off the boycott later in the day after speaking with MSNBC president Phil Griffin and receiving an apology. We're waiting for Priebus' apology for appearing on hate radio.