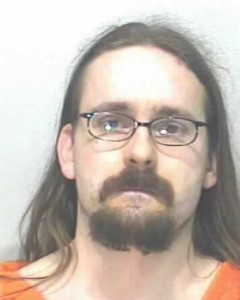 John Christian Parks was determined to prove that the Forest Service rangers who arrested him while smoking meth and firing off rifles out in the woods with his buddies had made an “illegal gun grab” when they confiscated his weapon. But what he accidentally wound up proving instead is just how easy it is for convicted felons to ignore federal laws prohibiting them from owning guns.

Parks, a 38-year-old white supremacist from western Washington state, was busted in March 2013 with several of his friends when Forest Service officers encountered them at a clearing in the Mount Baker-Snoqualmie National Forest. The officers let Parks go on his own recognizance, but confiscated methamphetamine and drug paraphernalia, along with his rifles. According to a detailed account by Levi Pulkkinen in Seattlepi.com, Parks began leaving phone messages demanding his guns and body armor back from the officers within days of his arrest.

That in turn spurred the interest of federal firearms agents, since Parks was a well-known felon – in fact, he had eight prior convictions. In 2004, while in King County jail on drug charges, Parks had briefly escaped by dashing out a jailhouse door and onto the street. Parks was free for several hours before he was surrounded by a crowd of concerned citizens and returned to custody.

So the agents went to Parks’ home in Belfair – a rural locale at the headwaters of the Hood Canal – a few weeks after the encounter in the forest. There, they discovered a large cache of weapons and ammunition — in all, there were eight guns, including four assault-style weapons. They also found a veritable library of white-supremacist literature, most of it produced by the racist Christian Identity movement, which preaches a brand of religion based on the idea that white people are the true Children of Israel, Jews are literally the spawn of the devil, and other races are subhuman, soulless “mud people.”

The racist material, naturally, played no role in Parks’ subsequent trial and conviction. Instead, prosecutors focused on his arms cache and his prior felony convictions, and did not introduce any evidence related to his racial beliefs for the jury that heard the case, according to Pulkkinen, “in an effort to keep Parks from being punished for his beliefs rather than his conduct.”

On Thursday, U.S. District Judge Thomas Zilly sentenced Parks to eight years in prison. Zilly pointedly noted that the case “illustrates how easy it is for anyone to buy firearms online or on the street.”

Indeed, much of the case revolved around Parks’ multiple gun purchases after getting out of prison, which he was able to do with great ease despite his status as a convicted felon. One of the guns was purchased through an online gun seller. Two more were purchased in a gas station parking lot from a local seller who had purchased the guns legally at local stores.

After buying a rifle from the online seller, Parks thanked him in an effusive, breathless and Identity-oriented rant: “Thank you and Yahweh bless you and the men and woman you work with in uniform,” Parks wrote. “Yahweh protect you all from our enemies abroad and may you all uphold your oath to the constitution to protect it from foreign and DOMESTIC enemies that are trying every day … to bring a communist socialist dictatorship [where] the American is … the sheep to be [led] to the Gulag FEMA camps to have a fate as much of our Russian kinfolk did in the 20th century under the Bolshevik revolution IE:Jewish Zionist revolution=TORTURE and DEATH!”

Like many white supremacists, Parks appears to have been stocking up on guns and ammunition in anticipation of an apocalyptic collapse of modern society. But he also seems to have been motivated to proselytize on behalf of his white-supremacist beliefs.

According to Pulkkinen’s piece, Parks wrote to his girlfriend from federal detention asking to be put in touch with a local Identity pastor. He then wrote to the pastor and told him he had been an ardent Identity follower for the previous 16 years and had proselytized in prison, and asked for a “bible course” to help him spread the word. Parks also asked his friends to retrieve hate literature from websites.

Christian Identity has flourished in corners of the Pacific Northwest for several decades now, especially since the heyday of the Identity-affiliated Aryan Nations compound near Hayden Lake, Idaho, beginning in the 1970s and finally ending in 2000. A Metaline Falls, Wash.-based terrorist group that called itself The Order became briefly infamous in 1984 after a series of brazen armored car heists and the assassination of Denver radio talk host Alan Berg; the FBI finally killed its leader in a fiery shootout on Whidbey Island, near Seattle, in December of that year.

A number of small Christian Identity churches have operated in rural western Washington for a number of years, though their membership has largely been in decline. Nonetheless, they remain active in spreading hate literature to their small flocks of converts.

Parks’ specific church affiliations remain unclear, but those beliefs in the end had nothing to do with the prison time he now faces. Prosecutors made clear that the trial was about Parks’ overt flouting of the law.

“The combination of his drug dealing convictions (whether or not accompanied by drug use), his clear and deliberate attempts to conceal his identity as the purchaser of the charged weapons, and the nature of the firearms themselves (assault rifles capable of accepting extended magazines) demonstrate that Parks has no intention of complying with the law and will likely continue to obtain firearms upon release from incarceration,” wrote prosecutor Stephen Hobbs in filing documents.