A sovereign citizen who plotted to abduct police officers in Las Vegas and execute them has pleaded guilty to his seventh felony conviction but likely will end up spending less than a year in jail. 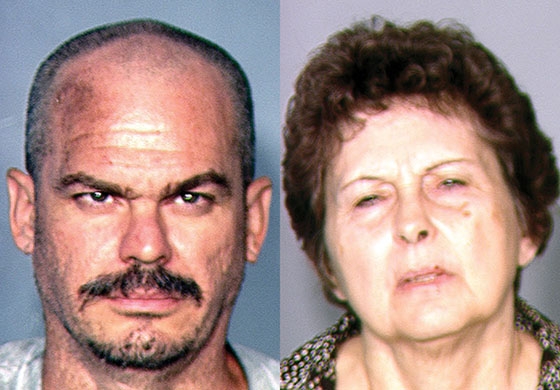 Brutsche, 43, and a woman described as his roommate, 67-year-old Devon Campbell Newman, were arrested by Las Vegas police last August after a four-month undercover investigation.

Police said Brutsche, with six previous felony convictions, “was committed” to the antigovernment “sovereign citizens” movement, considered by the FBI to be a “domestic terrorist movement.”

As part of the police investigation, undercover officers attended more than 30 “sovereign citizen ideology classes” hosted by the couple where authorities said they attempted to recruit members. Police said that secretly recorded conversations detailed plans by the couple to kidnap police officers, hold them in a crudely made jail cell in a vacant house, put them on trial in a common-law court, torture and execute them.

But the case apparently had legal weaknesses. A month after the arrests, the Clark County prosecutor dropped the two most serious charges, conspiracy to commit murder and attempted armed kidnapping, and federal charges were never brought.

Newman, a 68-year-old former paralegal who denied any affiliation with the sovereign citizens movement, pleaded guilty in December to a misdemeanor charge of conspiracy to commit false imprisonment. She was sentenced to one year probation and released from jail.

At Monday’s hearing, Brutsche continued to act as his own attorney – a common hallmark of sovereign citizens, who generally tend to reject legal authority and believe government has no control over them. Brutsche previously has said in court that he is a sovereign citizen but not part of “any organized movement,” the AP reported.

In confessing to his role in the police-kidnap plot, Brutsche told Clark County District Court Judge Elissa Cadish, “I wouldn't have gone through with it.”

“I do plead guilty,” Brutsche told the judge, adding that he thought he was a victim of police entrapment, according to the wire service account.

His guilty plea was linked to an earlier guilty plea to a misdemeanor charge of failing to register as a sex offender, said prosecutor Thomas Carroll.

As part of the plea deal, Brutsche is expected to receive up to five years' probation and a year in the county jail on the sex offender charge when he is sentenced in April. With that sentence, he could be out of jail by August.