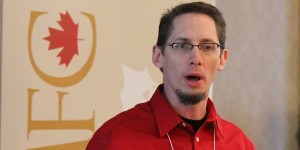 For the anti-gay movement, call it the gift that keeps on giving. The thoroughly discredited study by University of Texas sociology professor Mark Regnerus that was released July 2012 has turned up yet again, this time in the initial brief filed on behalf of the state of Utah in its fight against marriage equality. A federal judge ruled in December that Utah’s ban on same-sex marriage is unconstitutional. The Supreme Court granted a stay in January, and the lawsuit is currently wending its way through the appeals process.

The brief, filed by the state’s legal team late last night (beating the deadline by 30 minutes), suggests that children will somehow be endangered by marriage equality, and the Regnerus study is supposed to lend credence to the false claim that children raised in same-sex households fare worse in many ways than in households with opposite-sex couples.

However, Regnerus’ data does not support that conclusion, as he himself has admitted. Hundreds of sociologists have noted the study's flawed methodology while the American Sociological Association slammed the study in a March 2013 amicus brief filed with the Supreme Court. Meanwhile, documents obtained by the American Independent suggest that Regnerus was recruited to conduct the study in order to use its findings to influence possible Supreme Court decisions regarding marriage equality and in fact may also have been coached about how to discuss the study publicly.

In spite of all that, since its publication, the study has been used in several amicus briefs that oppose marriage equality and it has been cited as justification for anti-gay policy at home and abroad. Last September, a Russian lawmaker cited the study in conjunction with his proposed bill to deny gay and lesbian parents custody of their children. The study may also have played a role in the passage of laws against “gay propaganda” in Russia that have encouraged open homophobia and, in some cases, violent attacks.

The study has appeared overseas in other places, as well, like France’s rabidly anti-gay La Manif Pour Tous, which cites it on their website. In October, the study ended up in even farther right circles, when it made up the brunt of anti-gay claims on flyers handed out by activists with a far right nationalist youth group with neo-Nazi ties (see here, here, and here) called All-Polish Youth (APY; Mlodiez Wszechpolska or MW in Polish) at an LGBT event in Gdansk, Poland. 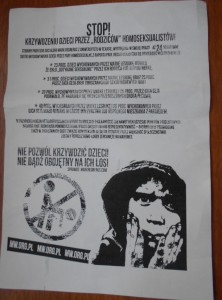 The flyer, translated from Polish for Hatewatch by a professor in Gdansk who requested anonymity because of a dangerous anti-gay and anti-progressive climate developing in Poland, took some of Regnerus’s more suspect findings and used them to link homosexuality to pedophilia, among other false claims. The flyer supplied both Regnerus’s and APY’s website addresses and implored people to “not let children be harmed! Do not be oblivious to their fate!”

For his part, Regnerus claims that he takes no responsibility for how groups and lawmakers use his study, though he offered a lukewarm response to the “misuse” of his study by Russian lawmakers. Still, he himself seems to stir the anti-gay pot.

Last February, for example, Regnerus gave an interview to a Ukrainian media outlet that ran the piece under the headline (translated from Russian) “First published shocking scientific facts about the families of homosexuals.” Like the Polish flyer, the article cited statistics taken from tables in the Regnerus study that purport to show that children raised in gay or lesbian families have higher rates of venereal disease and higher rates of mental illness than their counterparts raised in heterosexual households. Regnerus has also appeared as a speaker at anti-gay venues (see here and here) and testified before state legislators in Hawaii and Michigan against marriage equality.

For a man who claims he can’t be responsible for how others use his study, Regnerus sure spends a lot of time ensuring that others do, in fact, use his study, and often in ways that are detrimental to LGBT people both here and abroad.