Voters in the small eastern Nebraska city of Fremont will determine the fate of a controversial anti-immigrant housing ordinance today. The house ordinance, passed in 2010 with other anti-immigrant measures, was intended to banish undocumented immigrants from the town by barring them from renting there. It would require “renters to provide information to the police and to obtain city occupancy licenses.”

The housing ordinance was tied up in the courts until 2013. Last fall, as the city was preparing to enforce the ordinance, city officials decided to let voters decide whether to scrap it or push ahead with some of the most draconian immigration regulations in the country.

Some supporters of the ordinance have been distributing anti-immigrant flyers on cars around the city in the days leading up to today’s vote. The flyer describes undocumented immigrants as “invaders” and “criminals.” It claims that “providing housing to invaders is treason” and calls on citizens to support the “Illegal Immigration Ordinance” because the federal “government is not following the Constitution to protect us from the invaders.” 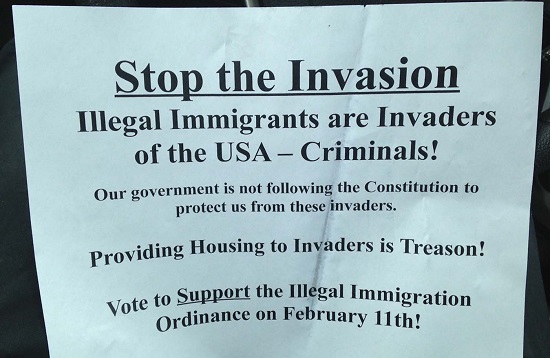 This extreme anti-immigrant rhetoric comes amid demographic shifts in Fremont that mirror changes in the nation at large – the Hispanic population in Fremont “jumped from 165 in 1990 to 1,085 in 2000 and 3,149 in 2010, mostly because of jobs at the nearby Hormel and Fremont Beef plants.”

Not surprisingly, the Federation for American Immigration Reform (FAIR) is working to uphold the ordinance. We have documented the racism at the core of FAIR and the related groups in the Tanton network.

FAIR’s national field director, Susan Tully, denounced the effort to repeal the ordinance as “un-American” and said “good riddance” to employers and landlords that would violate it. Needless to say, the citizens of Fremont may not feel the same way. Maintaining the draconian ordinance would only hurt the city’s economy further while wasting taxpayer dollars and cementing a reputation for intolerance.