The Culpeper County Sheriff's Office in Virginia is planning to host a three-day training by John Guandolo, a notorious Muslim-basher and conspiracy theorist who resigned from the FBI before he could be investigated for misconduct, according to promotional materials.

It’s hard to believe that the Culpeper County Sheriff's Office would knowingly associate itself with such a disreputable character, who regularly attacks the U.S. government, claims that the director of the Central Intelligence Agency is a secret Muslim agent for the Saudi government and says that American Muslims “do not have a First Amendment right to do anything.” 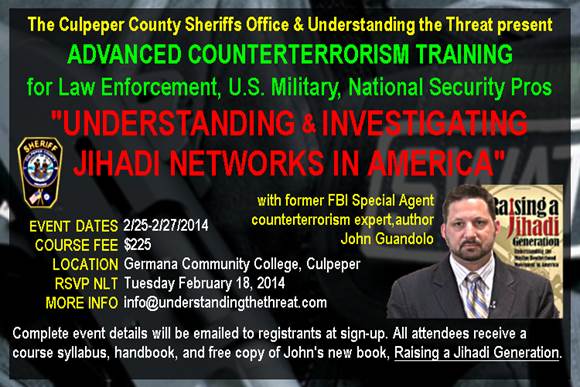 Guandolo joined the bureau’s Counterterrorism Division in the wake of 9/11, but by 2005 he was posing as a driver for a “star witness” in the corruption case of former Congressman William Jefferson (D-LA). He made “inappropriate sexual advances” to that witness and soon was having an “intimate relationship…that he thought could damage an investigation.” He also unsuccessfully solicited the witness for a $75,000 donation to an organization he supported and carried on extramarital affairs with female FBI agents.

Guandolo’s actions risked tanking the government’s prosecution of Jefferson, and he faced an investigation by the bureau's Office of Professional Responsibility. Though he later expressed “deep remorse” for his actions, he resigned from the bureau in December, 2008, ahead of an investigation by the Office of Professional Responsibility. Later that month, he became a full-time anti-Muslim activist and conspiracy theorist –– all under the guise of being a counterterrorism expert.

According to his resume, Guandolo became Vice President of the Strategic Engagement Group in December, 2008. He describes the tiny consultancy as the “only company in the United States aimed at identifying potential threats to homeland security.” This would come as a shock to the many U.S.-based consultancies and contractors who actually do this work, often for many millions of dollars – e.g. Booz Allen Hamilton, SAIC, Stratfor, Ashcroft Group. But that’s the thing about Guandolo, he actually believes that only he and a small cadre of allies – including the anti-Muslim ACT! For America, whose Thin Blue Line project he helped launch – understand geopolitics, terrorism and Islam. 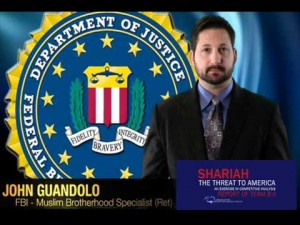 In Guandolo’s mind, the U.S. government has already been infiltrated by the enemy –– Muslims. He raised eyebrows –– and was widely mocked –– a year ago with wild claims about John Brennan, who was later confirmed as director of the Central Intelligence Agency. Speaking on a far-right online radio show, he claimed that Brennan had “interwoven his life professionally and personally with individuals that we know are terrorist” and given them access to top government officials. What’s more, he claimed Brennan “brought known Hamas and Muslim Brotherhood leaders into the government and into advisory positions.”

Why would Brennan do such things? Guandolo knows. It’s because Brennan was the target of a successful “counterintelligence operation against him” in Saudi Arabia and converted to “Islam when he served in an official capacity” there. And the conspiracy doesn’t stop there. Guandolo claimed a couple weeks later that President Obama had “made a significant effort to protect known members of Hamas and the Muslim Brotherhood inside this government.”

Back in the real world, the Senate voted in March, 2013, to confirm Brennan. He faced tremendous scrutiny, mostly focused on his aggressive posture on using drones to kill terrorists overseas. But Guandolo wasn’t fooled!

He continues to offer so-called trainings that reveal “the Muslim Brotherhood's infiltration of the US Federal Bureaucracy and its coverup by our own government.” He claims that the “Obama and Bush II administrations, along with state and local governments, have been blind to critical facts about the true nature of the enemy we face.” He also tells his trainees that American Muslims “do not have a First Amendment right to do anything.”

At a 2010 training in Columbus, Ohio, Guandolo falsely accused Omar al-Omari, a college professor, of having ties to terrorism. The training was suspended by the Columbus Police Department after the first day, with Columbus Deputy Police Chief Jeffrey Blackwell expressing shock that Omari’s “reputation was impugned incredibly” by Guandolo. The following day, the “head of the local Joint Terrorism Task Force and one of the FBI's top agents in Ohio both arrived at the academy and assured the class that Omari wasn't a terrorism suspect.”

When questioned later by National Public Radio (NPR), Guandolo claimed “that there were things he knew about Omari that the FBI didn't,” saying “We know we have our facts right, because we have to.” NPR reached out to a dozen contacts at the FBI, Homeland Security, et al. and was told that Omari “has no links to terrorists or terrorism” and Guondolo’s “accusations against him are unfounded.”

This is standard operating procedure for Guandolo, who sees conspiracies at every turn and believes that only he can see through them. But there are consequences when misguided and paranoid material is passed along as fact to law enforcement.

The Culpeper County Sheriff's Office should do itself –– and the citizens of Culpeper County –– a favor by pulling its sponsorship of Guandolo’s upcoming training. But they don’t need to take my word for it.

They should do their own due diligence on Guandolo and check with the FBI and other law enforcement agencies and associations to get their assessment of him as well as recommendations for qualified trainers. In the words of Deputy Police Chief Blackwell, the “last thing you want in your community, in any community, is for training that is supposed to help agencies to become better equipped to deal with people, actually inflame people and create fences.”