Photographs published this week by an anti-racist website show the late Andrew Breitbart, a leading figurehead among mainstream conservatives, and his onetime protégé James O'Keefe – whose undercover videos are credited with causing the demise of the community organizing group ACORN – rubbing elbows with young white nationalists at two different right-wing conferences.

The pictures are noteworthy because Breitbart, who died of a heart attack in March 2012, and O'Keefe had been adamant that they had nothing to do with the conference attendees – and vocally attacked anyone who suggested otherwise.

Instead, the photos published by the anti-racist organization One People's Project showed O'Keefe posing with numerous members of the white-nationalist group Youth for Western Civilization at a forum organized by the Robert Taft Club. Another shot shows Breitbart hobnobbing with YWC leader Matthew Heimbach, who has recently came out as a full-fledged Nazi, at an Americans for Prosperity gathering. 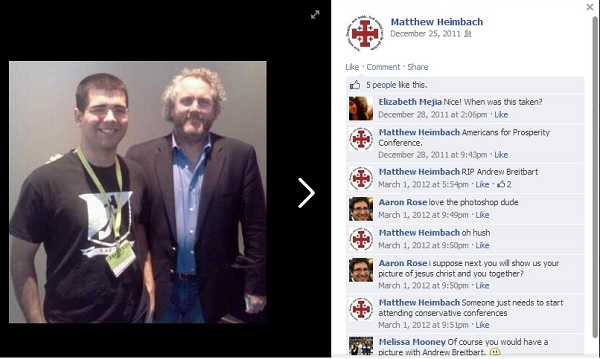 The Robert Taft Club held the "Race and Conservatism” forum in August, 2006 and was headed at the time by anti-immigration activist Marcus Epstein, who later pleaded guilty to assaulting an African-American woman in 2007. It featured a discussion between two noted far-right figures, "academic racist" Jared Taylor and pundit John Derbyshire of the National Review (since fired for writing racist articles). The forum had been forced to change its venue after the original sponsor – a conservative campus outfit called the Leadership Institute, which employed both Epstein and O'Keefe – pulled out when the Southern Poverty Law Center voiced concern.

O'Keefe attended the event and, according to One People's Project editor Daryle Jenkins, was instrumental in helping Epstein run the gathering. A report by Max Blumenthal for Salon on the gathering quoted a photographer who said that O'Keefe was “helping Marcus Epstein in the execution of the event.”

Blumenthal's piece inspired a notorious rant by Breitbart, who confronted the journalist in a hallway when he attended a different conservative gathering in 2010, accusing the journalist of smearing O'Keefe with his reportage on the gathering. "Why did you lie?" he demanded to know, jabbing a finger in Blumenthal's chest.

That incident in turn was woven into the "documentary" Hating Breitbart, a hagiographic film made after the activist's sudden death, devoted to showing that he and his protégés had been the victim of vicious attacks from liberals. This included O'Keefe, who described his participation in the 2006 event thus for the filmmakers: "Blumenthal said that because I was at a debate where this racist guy was debating this black guy, because I was present...then he went on to say how I organized the debate, blah, blah, blah. It's all false.”

One People's Project also published a photograph of Breitbart posing with Matthew Heimbach, taken from Heimbach's Facebook page. In the comments accompanying that photo, Heimbach's friends accused him of Photoshopping the picture; in reply, he informed them it was taken at an Americans for Prosperity gathering, and responded that his critics should attend more conservative conferences.

Daryle Jenkins told Hatewatch he was inspired to publish the old photos this week because he had finally gotten around to watching Hating Breitbart, and decided that he needed to update his older entry on O'Keefe to refute the film's claims.