Frank Taaffe, a self-styled “expert” who appeared on a number of talk programs on CNN and its Headline News subsidiary to offer his views on racially charged criminal trials, has recently emerged as an entrenched figure in the far-right white supremacist movement. While one of his frequent hosts, Nancy Grace, recently grilled him about his views, the network has neither backed away from using Frank Taaffe nor explained why it has done so at all, particularly without making his background clear to viewers.

Taaffe’s white supremacist background was first exposed last August by Mariah Blake in a thorough piece for Mother Jones, after Taaffe had appeared on a number of CNN programs defending his friend George Zimmerman, the Florida man who shot and killed unarmed black teenager Trayvon Martin. At the time, CNN made no explanation for using Taaffe as an “expert”, but after Zimmerman’s trial ended in acquittal, Taaffe stopped appearing. 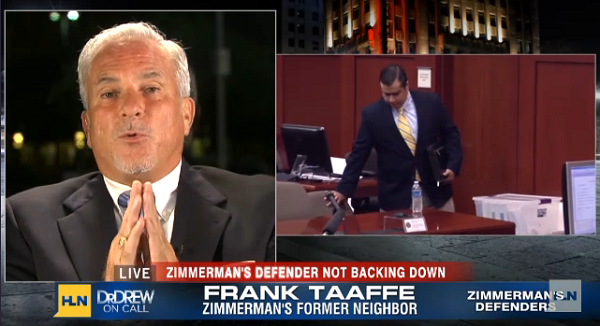 When another racially charged Florida case came along, this time involving a white man, Michael Dunn, who gunned down a young black man after a verbal confrontation at a gas station over “thug music,” Taaffe returned to CNN to discuss the cases, particularly Headline News’ Dr. Drew and Nancy Grace programs.

Last Friday, Grace finally confronted Taaffe about those views, including those appearing on his Twitter account, notably: “The only time a black life is validated is when a white person kills them." Grace claimed that these views only “very recently” had come to her attention.

“It’s not true,” Taaffe responded, adding: “And I have a pending lawsuit against Mother Jones, by the way. I’m glad you brought that up.”

Grace asked him about yet another quote: “That minority group, they don’t do anything productive for this country except for the NBA. And if it wasn’t for the NBA, Joe, like I always say, our country would have the world’s tallest garbage men. Thank God for the NBA.”

“That’s not my Twitter account,” Taaffe said, adding: “That’s some time from years back. Someone hacked into my account. So thank you for letting me get it out there.” However, as Mediate notes, the quote wasn’t taken from his Twitter account. It was taken from the Sept. 18 podcast of his show The White Voice, and it was Taaffe’s actual voice.

A representative for the Nancy Grace program contacted the Southern Poverty Law Center and emphasized that Taaffe has not been invited to appear on the show since Grace confronted him about his views, which she had previously been unaware of.

Even more damning was Rachel Tabachnik’s delving into the record of Taaffe’s activism, particularly on The White Voice and its affiliated network. In one show, she reports that he attacked Oprah Winfrey with vicious language:

Moreover, Tabachnik makes clear that Taaffe and his partner at The White Voice, Joe Adams, have been players in helping various factions of the white-supremacist movement network and form alliances. Notably, among the people who have become aligned with Adams and Taaffe have been Matthew Heimbach and his Traditionalist Youth Network operation.

Ironically, Taaffe and Adams heatedly deny that they are white supremacists, preferring instead to be designated white separatists, which is a common enough claim on the far right. And with most such protestations, it evaporates when the speakers’ actual views in their own words are recorded. They invariably entail vicious attacks on the character of people of color, demonization of them and their ostensibly threatening nature, and expressions of a desire to not merely separate from them but actively exterminate them.

All of these things can be found in the words that Taaffe and Adams regularly express on their network, including an exchange last fall in which they attacked the reporting in Mother Jones, and in which Taaffe makes clear that he in fact meant every word of that Tweet he claims was the product of a hacked account:

Because it goes back to the premise that, you know? I once said, "that the only time that a Black life is vindicated is when a White person kills them. Ok? Other than that we, we're just, we're part of the groove man. It's ok to off twelve of us and you know, nobody cares, you know? I guarantee you that if I stormed into the local KFC with an AR-15 and offed about twelve of them, you know, I don't think I'd make it out the front door.

Taaffe has also argued that whites and blacks have no business mingling: "They don't want to be with us and we don't want to be with them." On a White Voice show last July 27, he became so worked up about the Zimmerman trial that he began calling for a revolution: "This trial is waking up white America, man," he said. "I'm fed up with the bullshit and the glad-handing to this one group of people who now control what we do and say. Come on, man, wake up America!"

Adams, who at one time was a follower of the neo-Nazi Creativity Movement, has views that are every bit as toxic: "I think naturally, the races will segregate -- blacks getting the southeast and kind of up the east coast. Hispanics -- you know, the mestizos -- getting Texas, California, Arizona, those kinds of areas. And then whites...having the mid-north or northwest to have to themselves, and, you know, maybe even a part or two of the northeast."

Adams’ protestations of only seeking separate societies also are less than assuring: "We don't advocate for white supremacy or, you know, Nazi gassings of Jews...we just care about a future for white people, white children, you know....We're not saying, 'Throw all the blacks and the coloreds and the Jews out.' We're just saying, 'Hey, let us break off and go our own way. If we're evil, wicked racists, then be free of us, and...let us go our own way.'"

Meanwhile, Adams’ guide for his followers, The Save White People Handbook, opens with the inscription: “A mutt makes a great pet and a mulatto makes a great slave.”

It was this sensibility that Taaffe brought to Headline News audiences and the discussion of the Zimmerman and Michael Dunn “thug music” cases. Here’s how he explained the Dunn shooting on Dr. Drew:

TAAFFE: You know what, Ms. Ali, you talk about the white man being the devil -- well, here’s a fact. I want to only discuss the facts in the Michael Dunn case and particularly about crime in America. … According to the FBI, and the U.S. Department of Justice, African- Americans make up 12 percent of the population, yet they commit the most disproportionate amount of violent crimes. Over 60 percent of the murders were committed by African-Americans. And 32 percent were under the age of 18. So, when Michael Dunn pulled into that gas station, you know, you wonder why we have these premonitions, we see …

He also explained that the problem was with black people:

You know white racism is not America's biggest problem. I feel the biggest problem is education… There's a distinct gap between the graduation rate of African Americans versus white or Latinos in the country… And this was simply a matter of loud music, a man asking them to turn it down and they did not oblige and then it escalated.

Taaffe has been defensive when called out for his views. "There is a thing called First Amendment speech," he said to Mariah Blake. "I have freedom to opine on current social issues, and I'm not going to be restricted.”

"I'm not going on some Tom Metzger-David Duke tangent," he added. "I'm merely echoing the suppressed voices in this country that have been beleaguered by affirmative action and crimes committed by that particular group of people."

Taaffe has an outright fetish about black crime statistics, as made clear in his response to Nancy Grace in one of his appearances there:

The music was the precursor to Davis telling him, I`m going to kill you, man. That`s what he heard. Three-hour interview with the police, he never wavered off it! He stayed consistent. What`s inconsistent in this story are the three witnesses that were in the vehicle, one who is a convicted felon and the other one`s awaiting trial for a robbery charge in St. Petersburg! How about them apples?

However, as Blake’s reportage details fully, there is no small irony in Frank Taaffe pointing to the criminality of anyone, white or black, considering his own long criminal background:

According to the Florida Department of Law Enforcement and the Orange County Clerk of Courts, Taaffe has been arrested or faced criminal charges nearly a dozen times and logged at least two convictions. Last year, Taaffe was taken into custody for driving under the influence. He pleaded no contest to a lesser charge of reckless driving related to alcohol use and received six months' probation. He's also been charged with battery and two cases of "repeat violence." (Taaffe told Mother Jones that these were "frivolous" charges filed by "disgruntled" former coworkers.)

The piece details Taaffe’s extensive rap sheet, including domestic-violence-related incidents and an arrest for burglary, as well as stalking and child abuse.

Of course, all of this information was available months ago. It is still unclear why CNN or the producers at Headline News either were unaware of it or chose not to act on it.