James Laffrey has not been publicly advocating ethnic hatred for very long. He does not appear to have many, if any, followers. He is not particularly well-connected to more established entities on the anti-Semitic far right. But what he does have is a website and plans to create a white supremacist political party called Whites Will Win.

Laffrey, a middle-aged man who appears to be based in Michigan, has caught people’s attention with the bloodcurdling nature of his agenda: he openly calls for the assassination of Jewish people by their white neighbors. 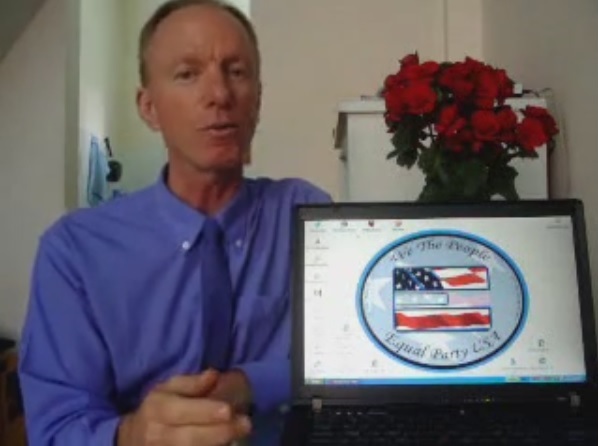 Here is a typical rant by Laffrey, in the midst of discussing a TV show featuring Tom Selleck: “The jews are killing us. We must kill them.”

Similarly, in a post about another TV series, he writes: “Kill every jew. We have every right to do so. Also, it is our duty and our pleasure.”

Laffrey wants the targeting to be indiscriminate:

Do it carefully. Safely. Proudly. Silently. Again and again. That’s our necessary strategy for now, as our massive wave of White Might rises across our land from sea to shining sea.

In a post published last April, Laffrey outlined a program of assassination in which white men would surreptitiously begin killing Jews on a lone-wolf basis, while robbing their victims and living off the proceeds:

See that no witnesses are present. Likely wear gloves. Permanently “persuade” the jew to relinquish residence as an enemy parasite in North America. Quickly. Efficiently. Reappropriate the cash. …

Your heroism in reducing the enemy jew population infesting our country is your secret for the rest of your life or until White victory is achieved, whichever comes first.

Laffrey’s own description of his radicalization suggests that he came to hold these views about Jews and society only in recent years. He claims to have voted for Barack Obama for president in 2008, but then came to believe that a cabal of Jewish financiers secretly controls the world, and that Obama was completely under their control. “I bought into the corporate media’s selling of the product called Barack Obama. I admit it. I regret it. Shame on me. At that time, I was still race-blind, as we all have been taught and brainwashed to be.”

He claims he “began to do my own research to find out who was behind the entire system of treason” and concluded that the Jewish Rothschild family was controlling the world’s politics and economics through a nefarious cabal of fellow Jews and their enablers. This is, of course, classic anti-Semitic conspiracism, of the kind long practiced by a variety of Nazis, fascists, and their modern descendants, and Laffrey’s interpretation of it does not bring much new to the ideological table.

Laffrey at first attempted to organize a political party under the name Equal Party USA, and at first he was coy about the nature of his anti-Semitic campaign. In a 2012 YouTube video, he teases viewers with the promise of a radical “American solution” to “the infestation of the USA” which he describes as “practical and nonviolent.” Not long after, he created the Whites Will Win Party and authored posts claiming to prove that Obama is Jewish and Mitt Romney likely is too. He claimed that JFK, FDR and Mark Twain were Jewish.

Laffrey was initially committed to nonviolence but shifted away from that position, having decided that the United States had been founded as “a country that only Whites could fully appreciate and maintain as a safe haven for Whites” and that “Whites must overthrow Jewry” as a first step to any solution. His ultimate program? “Every jew in the USA not executed or imprisoned here will, after sterilization, be expelled.”

The most noteworthy thing about Laffrey is his open advocacy of murder. This kind of speech would be impermissible in a number of countries, notably Germany, the U.K. and Canada. But in the United States, because it does not rise to the level of a “true threat” – that is, no individual is being directly threatened by this speech – the courts have consistently held that such talk is, while deplorable, protected under the First Amendment.

Laffrey did not respond to our requests for comment.

Laffrey has generated little attention outside the white supremacist realm, but he has drawn notice within it. However, a number of his fellow white supremacists have indicated they resent his entry into anti-Semitic organizing without having established himself first in the community. Laffrey appears to have little following, with only slight web traffic, and no financial support.

But he is, if nothing else, another example of how a single person can poison the well by leveraging the power of the web.