On a gorgeous spring day in Phoenix, a few hundred conservatives gathered at the downtown convention center to hobnob with lawmakers and stars of the movement at an event formerly known as Western CPAC, referencing the annual Washington, D.C.-based right-wing Conservative Political Action Conference, but now called the Western Conservative Conference (WCC). The conservatives spent their time gnashing their teeth at panels dedicated to the usual conservative bugaboos. They hit all the hot topics: President Obama is “lawless,” Obamacare is the worst. law. ever., the Constitution is under attack, OMG taxes, immigration amnesty will cause the collapse of the United States and gun control will lead to Nazi Germany.

The WCC took place last Saturday. It included a red-meat lineup of speakers at the morning plenary session. Keynote speaker and failed presidential candidate Herman Cain provided folksy anecdotes and exhortations to “stay informed, stay involved, and stay inspired” (something you can accomplish via his website, which he made sure to mention several times during the speech), and had the crowd on its feet. 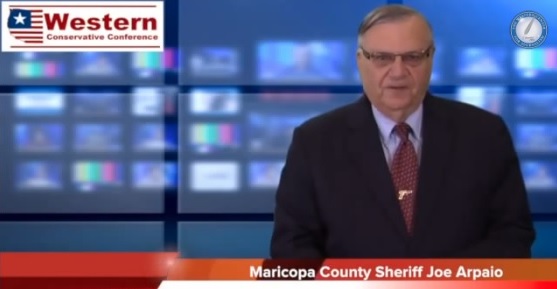 Tea Partier Darla Dawald, the national director of the Patriot Action Network, announced that she’s running for office (Arizona state representative) and Tea Party News Network’s news director Scottie Hughes insisted that the conservative movement “is the true movement of diversity,” a claim that didn’t seem to hold much water, given that the vast majority of the gathered crowd was white and not particularly young.

Joe Miller, perpetual Alaska senatorial candidate and Tea Party favorite, claimed that the government keeps a dossier on all of us and wondered why the House of Representatives has not started impeachment proceedings against President Obama, saying “this man needs to go” to the cheers and applause of audience members.

Panels included the usual array of conservative boogeymen, spouting fears common to the antigovernment movement.  Whole sessions were devoted to topics like “Is An Economic Collapse Coming?” and “Threats To The Constitution And Bill of Rights.” The panel titled “Emerging Issues for Conservatives” seemed to proffer what might be a whole new conspiracy theory regarding the European Union’s recent statement that Internet governance is generally too U.S.-centric and recent revelations about U.S. surveillance have called into question U.S. leadership is this regard. According to George Landrith of the conservative free-market think tank Frontiers of Freedom, the European Commission is just using the revelations about NSA spying as “an excuse” to somehow take over the Internet, which, he says, was invented in America and should thus stay in America.

The panel on immigration, titled “Immigration Reform: The Good, The Bad and the Ugly Truth” was mostly about the bad. Participants decried SB 744, the immigration reform bill that passed the Senate last year and that would supposedly grant amnesty to 20-30 million “illegal aliens” in this country (most estimates put the number of undocumented immigrants at 11 million). The bill is so bad, according to the panelists, that the country would be headed for collapse.

Perennial anti-immigrant crusader and former Arizona senator Russell Pearce moderated the panel, lamenting that “we have become a godless and lawless nation” and “you can’t fix it if they pass amnesty. This country will have gone under.” One panelist with an organization called the “National Association of Former Border Patrol Officers” warned ominously that Hamas and Hezbollah are already in Arizona (but he said he couldn’t say any more than that) while another, from the Heritage Foundation, called for securing the border through various means like fencing, sensors, and enlisting the National Guard and “local militias.”

The National Rifle Association (NRA) luncheon (a group those gathered called a “civil rights organization”) included speakers like Arizona congressman and anti-Muslim conspiracist Trent Franks and NRA board member Susan Howard (who portrayed Donna Krebbs on Dallas). Both drew parallels to Nazi Germany as they railed against gun control.

The event was capped with a $100-a-plate evening roast of eighty-one-year-old Maricopa County sheriff, birther, and conservative darling Joe Arpaio, whose reputation for racial profiling (see here and here) and corruption has kept him in the media spotlight for years. Ted Nugent sent his well-wishes via video as did Texas Governor Rick Perry. Tough guy actor Steven Seagal (a member of Arpaio’s “citizens’ posse”) was on hand, but rather than participate in expected roast humor, he instead fretted about the perceived state of the country and wondered why the current administration is still in power even in the face of “scandals” like Benghazi (still a favorite right-wing conspiracy theory). Other roasters included Russell Pearce and Arizona State Senator John Kavanagh, author of last year’s anti-transgender bill. Kavanagh roasted Arpaio over his age and career. At one point, referencing a light that was shining in Arpaio's face on stage, he joked about racial profiling: "It's okay. I'm not the federal monitor. How many Hispanics did you pull over on the way over here, Arpaio, huh?"

Not much mention was made at the conference about the passage two days earlier of the so-called “religious freedom” legislation (SB 1062) that makes it legal to discriminate on the basis of a “sincerely held religious belief.” The bill is seen to target LGBT people, and is strongly supported by the Arizona-based Alliance Defending Freedom (no stranger to anti-gay sentiment) and the Center for Arizona Policy, another longtime anti-gay fixture in the state. Both groups worked on the measure. The bill, which is overwhelmingly opposed by many business groups in the state, awaits either governor Jan Brewer’s signature or veto, one of which will come this week.