Ted Nugent, the metal guitarist-turned-hunting-aficionado, has been in the news a lot lately – and not in a good way. His former friends in the conservative and mainstream media who had smiled and turned a blind eye to his extreme rhetoric over the years finally seemed to reach their limit this week after Nugent’s shtick descended into outrageously racist remarks attacking President Obama. That in turn was followed by a series of increasingly bizarre media appearances by Nugent in which he made outrageous claims and exhibited a strange and twisted worldview.

Of course, none of this is really news to people who have followed Nugent for long: he has a long track record of extremist rhetoric and behavior, often violent and outrageous in nature. The more pertinent question, perhaps, is why it took this long for everyone else to figure it out. 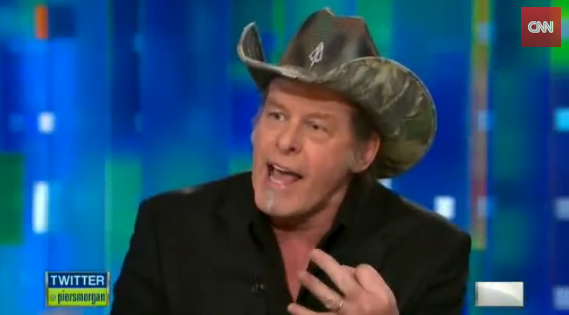 The most recent explosion of nuttiness surrounding Nugent revolved around an interview he gave in January to Guns.com at a gun-industry trade show, when he called President Obama a “subhuman mongrel” who should tried for treason:

NUGENT: I have obviously failed to galvanize and prod, if not shame enough Americans to be ever vigilant not to let a Chicago communist raised communist educated communist nurtured subhuman mongrel like the ACORN community organizer gangster Barack Hussein Obama to weasel his way into the top office of authority in the United States of America. I am heartbroken but I am not giving up. I think America will be America again when Barack Obama, [Attorney General] Eric Holder, Hillary Clinton, [Sen.] Dick Durbin, [former New York City Mayor] Michael Bloomberg and all of the liberal Democrats are in jail facing the just due punishment that their treasonous acts are clearly apparent.

He went on to also refer to Obama as a “chimpanzee”.

The issue might have just festered and gradually died away were it not for Nugent’s busy schedule campaigning on behalf of a number of Tea Party-oriented Republican candidates, notably Texas gubernatorial hopeful Greg Abbott. After Nugent made campaign appearances on his behalf, Abbott’s campaign began facing questions about Nugent’s recent remarks. The Abbott campaign released a statement distancing itself from Nugent. The issue reached a head when CNN’s Wolf Blitzer interviewed Abbott and asked him about Nugent.

Well before this most recent descent into insanity, though, Nugent had a well-established record of extremism in his rhetoric, particularly his propensity to suggest or threaten violence as a political solution in a democratic system.  In 2007, for example, he told a crowd at one of his rock performances:

NUGENT: I was in Chicago last week. I said -- Hey Obama, you might want to suck on one of these, you punk? Obama, he's a piece of shit, and I told him to suck on one of my machine guns... Let's hear it for them. I was in New York and I said hey Hillary -- you might want to ride one of these into the sunset you worthless b----...  Since I'm in California, I'm gonna find-- she might wanna suck on my machine gun! Hey, Dianne Feinstein, ride one of these you worthless w----. Any questions? Freeeeedom!

He also went on a Fox talk show and talked in a similarly violent vein:

That’s only scratching the surface of Nugent’s long record of incendiary rhetoric, which includes not only racially charged remarks but also misogynistic and sexist talk and behavior, with intimations of child sexual abuse thrown in.

The recent escapades have finally hit home, however. Sen. Rand Paul denounced Nugent’s remarks and said the rocker ought to apologize. The Washington Times and Rick Perry chimed in similarly. As Jewish Week observed, Nugent was doing a great job of driving minorities away from the Republican Party.

Yet in spite of the bizarre behavior and increasingly extreme and overtly racist rhetoric, Nugent remains a popular figure. Abbott remains a friend. He is even still treasurer of the Sid Miller for Texas Agriculture Commissioner campaign.

And he still has a regular weekly show on Outdoor Channel, Ted Nugent Spirit of the Wild, and remains a board member of the National Rifle Association. Both the NRA and the Outdoor Channel have declined to comment when asked Nugent’s status with their organizations in light of his recent remarks; the SPLC’s calls to Outdoor Channel this week were not returned.

The Coalition to Stop Gun Violence announced it was mounting a petition and letter-writing campaign to persuade the Michigan Economic Development Corporation – the state’s chief tourism and marketing agency – to drop its associations with Outdoor Channel and Nugent in coproducing his show.

“We were shocked to hear that MEDC was working with the Outdoor Channel and high-profile spokesman Ted Nugent,” said the Coalition’s Ladd Everitt. “It’s not just the decades-long litany of racist, misogynistic, homophobic, and anti-immigrant statements that have come from the aged rocker and NRA board member.  It’s also the fact that Nugent has called the ‘Pure Michigan’ campaign ‘basically a façade’ run by ‘hash bash hippies.’  You have to wonder what they were thinking when they signed this guy on to promote their state.”