While there was predictable outrage from many right-wing quarters this week over Arizona Gov. Jan Brewer’s veto of S.B. 1062 — a bill that would have legalized discrimination against LGBT people on the basis of protecting the “religious freedom” of people who did not wish to do business with them — the overwhelming reaction by most Arizonans, particularly its business people, was one of relief.

After all, the state is still recovering from the economic blowback wrought by another piece of far-right legislation – the infamous anti-immigrant S.B. 1070 legislation that put local law officers in the business of enforcing federal immigration law. The damage inflicted by the law itself, worsened by boycotts and other economic retaliation provoked by that legislation, remain fresh in the minds of the state’s business leaders, who pleaded with Brewer to boycott the law, as did the state’s entire congressional delegation and even a few of the legislators who had originally voted for the bill. 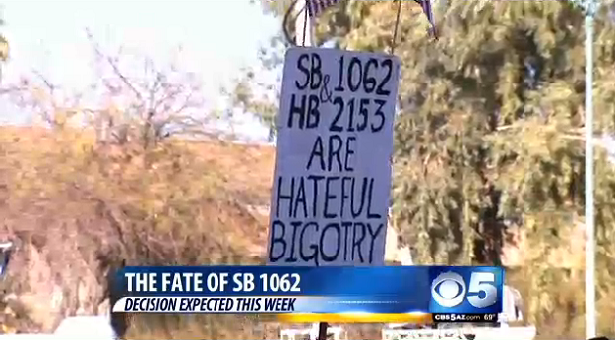 Fairly typical of the language of these proposals is that found in the Idaho legislation, which permits businesses to avoid penalties for “declining to provide or participate in any service that violates the person’s sincerely held religious beliefs or exercise of religion.”

This kind of language would “empower businesses to invoke religion to discriminate,” says Daniel Mach, director of the ACLU’s Program on Freedom of Religion and Belief. “This wave of legislation does seem to be a reaction to an expansion of LGBT rights, among others.”

But defenders of the laws deny this is the case. Ryan T. Anderson at the Heritage Foundation insists the only issue at stake is “liberty”: “While the government must treat everyone equally, private actors are left free to make reasonable judgments and distinctions — including reasonable moral judgments and distinctions — in their economic activities. Not every florist need provide wedding arrangements for every ceremony. Not every photographer need capture every first kiss. Competitive markets can best harmonize a range of values that citizens hold.”

The legislation universally features language referring to the “substantial burden” imposed on businesses by anti-discrimination laws. That in turn indicates that legislators are tying their hopes to its ultimate success to other cases involving similar principles — in this case, efforts to overturn the mandate on businesses imposed by the Affordable Care Act’s provisions to provide contraception to women. Notably, Hobby Lobby is seeking to overturn that rule on the basis of the claim that it imposes a “substantial burden” on its religious beliefs.

“Never before have the courts given for-profit businesses an exemption from a generally applicable law based on the owners' religious beliefs,” says Mach. “Every time it has been attempted in the past, they lost. And so I think there is an attempt to do something unprecedented here.”

Most of this legislation originates with the same source: the Alliance Defending Freedom (ADF), the Scottsdale-based religious-right organization formerly known as the Alliance Defense Fund, which is ostensibly dedicated to advocating for Christians’ right to “freely live out their faith.” ADF is also active in working to criminalize gay sex in other countries, and played a key role in the recent passage of Uganda’s new laws outlawing homosexuality. It is also active in supporting a number of lawsuits involving conservative Christians’ rights to discriminate against gays and lesbians.

The most problematic aspect of the “religious freedom” legislation that has been proposed so far is how vague its language is and how broadly it can be applied. Indeed, each of the bills so far applies “religious freedom” not just to the issue of providing services to gays and lesbians, but conceivably to every kind of prejudice under the sun. People could refuse to serve interracial couples, for instance, or for that matter anyone of another religion or ethnicity or who has disability.

If someone claimed, for instance, to be a believer in Christian Identity — the wildly racist religious movement that preaches that white people are the true children of Israel, Jews are the literal descendants of Satan, and other nonwhites are soulless “mud people” — one could conceivably use the laws to refuse to provide services to Jews or blacks.

In that event, he observes, these laws are not merely a reaction to advances in LGBT rights, but a whole broad swath of civil rights laws.

One of the laws’ main defenders — paleo-conservative columnist Patrick Buchanan — essentially admitted as much in his column on the debate over Arizona’s law. He offered a simple proposal: “Suppose we repealed the civil rights laws and fired all the bureaucrats enforcing these laws.”

“Does anyone think hotels, motels and restaurants across Dixie, from D.C. to Texas, would stop serving black customers? Does anyone think there would again be signs sprouting up reading ‘whites’ and ‘colored’ on drinking foundations and restrooms?”