It’s been a busy couple of days for University of Texas at Austin sociology professor Mark Regnerus, whose methodologically flawed and thoroughly discredited study with suspect ties has provided ammunition for anti-LGBT groups and policies since its 2012 publication  in the United States and around the world. The study even appeared on flyers used by a Polish group with neo-Nazi ties.

Yesterday he testified for three hours as an “expert witness” for the state of Michigan in the court proceedings of a lesbian couple who filed suit against a state law that prevents them from adopting each other’s children. They’ve also taken on the state’s ban on marriage equality, which was approved by voters as a constitutional amendment in 2004. 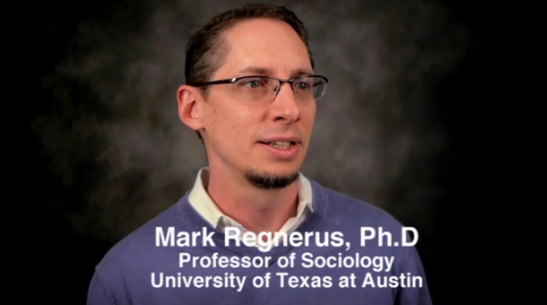 The Human Rights Campaign linked to tweets by Tresa Baldas, a staff writer for the Detroit Free Press, who noted that Regnerus admitted that he is “not a fan” of same-sex marriage and that adoption and foster-parenting are “not the ideal” and that he is “not a fan” of in vitro fertilization because in his view, it “reduces kinship.” Baldas also tweeted that Regnerus denied creating the study to derail same-sex marriage but said that a group that funded it wanted to use it before the Supreme Court.

Regnerus, who previously has admitted that his research has flaws, will be cross-examined today.

Meanwhile, Regnerus’ own department chair at the University of Texas-Austin released a statement yesterday, as the New Civil Rights Movement noted, distancing the department from him and his research, stating that “Dr. Regnerus’ opinions are his own. They do not reflect the views of the Sociology Department of the University of Texas at Austin.” Nor, the statement goes on to say, do Regnerus’ research and views reflect the views of the American Sociological Association, “which takes the position that the conclusions he draws from his study of gay parenting are fundamentally flawed on conceptual and methodological grounds and that findings from Dr. Regnerus’ work have been cited inappropriately in efforts to diminish the civil rights and legitimacy of LBGTQ partners and their families.”

The statement further noted that the department has no ties to the Austin Institute for the Study of Family and Culture (AI) – Regnerus’ latest affiliation (he’s a senior fellow) – which is a conservative think tank a few blocks from his campus office. The Austin Chronicle’s Brandon Watson has been covering the institute (see here and here), which is being hailed in some circles as “Witherspoon Institute South,” a reference to the New Jersey-based Witherspoon Institute, which provided nearly $700,000 in funding to Regnerus for his discredited study.

The University of Texas at Austin’s College of Liberal Arts released its own brief statement about Regnerus, saying that his views are his own and do not reflect the views of the university.