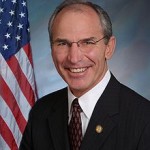 Now that former Congressman Bob Beauprez has officially entered the race for the Republican nomination for governor in Colorado, his long record as a rabble-rousing conservative is being closely examined. This week an old video he recorded in 2012 resurfaced at ColoradoPols.com, showing Beauprez contemplating the possibility that Americans might turn to violent revolt against the Obama administration.

The observations came in an interview with Perry Atkinson of The Dove TV program Focus Today, recorded July 31, 2012. Beauprez and Atkinson were discussing the alleged dangers of American participation in various United Nations treaties “that potentially would allow Iran to disarm Americans.” Watch:

BEAUPREZ: Well, some are wondering what will be the, the line that gets crossed eventually, where, where people actually rise up and say enough. I mean, our founding documents refer to it, that people have every right, a free people have every right, that when government becomes too obtrusive, too obsessive, too overwhelming, and infringes on their individual liberty and freedom, free people have the right to overthrow that government and establish a new one.

The treaty they are discussing, the proposed Arms Trade Treaty, is the focus of numerous far-right conspiracy theories, particularly among John Birch Society adherents and like-minded anti-government “Patriots”.

Beauprez, who campaigns as a “Tea Party” conservative these days, is no stranger to controversy. During his 2006 bid for the governorship (a race he eventually lost to Democrat Bill Ritter by a 17-point margin), he claimed during a debate that “as high as 70 percent, maybe even more” of African-American women’s pregnancies end in abortion, a remark for which he later apologized. Also, his campaign was briefly embroiled in a controversy involving the misuse of a national criminal database for ads targeting Ritter.