It sounded too good to be true, like something from a Burt-Reynolds-meets-Duke-of-Hazzard movie: A cross-country “Cannonball Run”-style road race, sponsored by a Southern “colonel” whose wealth comes from making copper moonshine stills, with a big $50,000 prize waiting at the end. And sure enough, as with most schemes cooked up by so-called “sovereign citizens,” it fell apart upon close scrutiny.

The race – dubbed “Cannonball One,” and described as a “coast to coast race from sea to shining sea” – required an entry fee of $90, and the website promoting it used weasel language about the prize, saying participants could “potentially win up to $50,000”. The competition, scheduled for June 1, had no check points, and any kind of road vehicle, including motorcycles, would be accepted. You could buy your entry tickets through eBay. 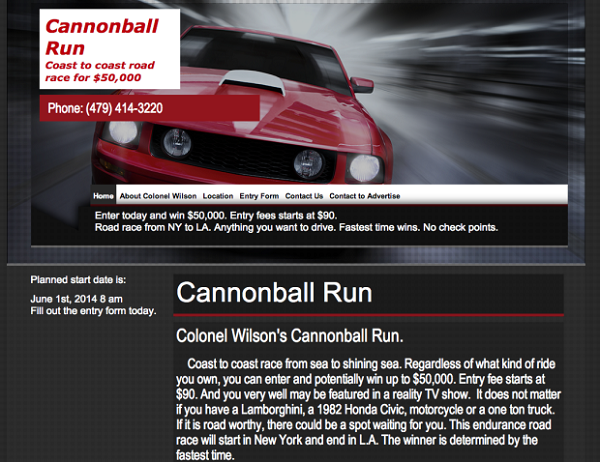 The man promoting the race, Vaughn Wilson of Alma, Arkansas, is a self-styled “colonel” who poses for portraits in a white Col. Sanders-style suit. He appears to make most of his income from selling copper moonshine stills that he custom builds to owners’ specifications, according to the website where he markets them.

If Wilson’s scheme sounds a bit outlandish even to ordinary members of the public, it was obviously outrageous to people in the auto-racing community, especially those who had participated in a variety of cross-country races themselves over the years. This included Matt Farah, senior editor over at the auto-racing website The Smoking Tire, who knew, as he described it in his subsequent piece, that “a proper ‘Cannonball’ in the traditional sense is a coast-to-coast, underground race. No hotels. No stopping. Invite only. Low key. Tell no one. Don’t advertise it, or we’ll all go to jail. Wait a year to release your time so the statute of limitations on speeding expires first.”

So Farah called Wilson up personally and recorded the call on video. At about the seven-minute mark of the video, Wilson launches into an attempt to recruit Farah into his scheme to manipulate what he calls “common law” in order to obtain large sums of money. Indeed, it appears that such schemes are the basis for the supposed $50,000 prize money for the proposed race.

Farah described what he learned about Wilson and his beliefs from the call:

Farah concluded, in his conversation with Wilson, that “I thought maybe you were stupid, but you’re actually just insane.”

Participants in a web forum devoted to Ferraris had a humorous discussion about who might have actually been persuaded to try joining the race (no one admitted to this). One noted that he had an email exchange with Wilson, querying about the liability issues, and had received this reply:

Hey Dave. There is a liability clause in the entry form. And it is not suggested for anyone to break the law. Also all rights are reserved. See UCC 1-308

America without the U.S. federal corporation

The sovereign domain of His Royal Majesty's creation.

All information given is for informational purposes only. User assumes all risk at all times, places and circumstances. Reliance on any of it by anyone without doing further research, proving, having proof, or verifying is prohibited.

CAVEAT: You have now entered ecclesiastical jurisdiction pursuant to the highest law, the Royal Word of God (Bible), See 1 Corinthians 6:2 and further, the free Exercise Clause of the First Amendment U.S. Constitution, Declaration of Independence 1776, Magna Carta 1215/1225 and Robin vs. Hardaway 1790.

These ideas and beliefs, of course, are classic instances of so-called “sovereign citizen” movement ideas – a belief system derived from far-right interpretations of history and the Constitution that originated with the Posse Comitatus movement. Movement followers believe that they get to decide which laws to obey and which are mere products of an illegitimate government, and they refuse to pay taxes or heed normative licensing laws.

Wilson’s “Cannonball One” website promoting the race has been taken down and is now defunct. He has not yet responded to SPLC’s queries about the race and its status.