A 27-year-old woman who joined her boyfriend in a 2011 murder spree to kill Jews and minorities has pleaded guilty in Portland, Ore., in a deal that calls for her to spend the rest of her life in federal prison without the possibility of parole.

Holly Ann Grigsby told Senior U.S. District Judge Ancer Haggerty Tuesday that she did not kill any of the victims, including the stepmother of her boyfriend, David "Joey" Pedersen, the The Oregonian reports in today’s editions. 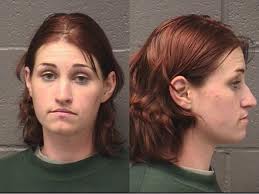 After the pair were arrested in October 2011 and accused of a murderous crime spree in Washington, Oregon and California, Grigsby told a California newspaper reporter that she had killed DeeDee Pedersen because white supremacists believe that men should not murder women.

Despite Grigsby’s changed story, Assistant U.S. Attorney Jane Shoemaker told the court that the prosecution was prepared to prove that Grigsby had slashed DeeDee Pedersen's throat, using two knives because one was not sharp enough, The Oregonian reported.

Pedersen, now 33, and Grigsby, both from Oregon, were named in a 14-count racketeering conspiracy indictment returned by a federal grand in Portland in August 2012. U.S. Attorney General Eric Holder decided not to pursue the death penalty, but federal prosecutors in Oregon took the lead in prosecuting the pair who faced state charges in several jurisdictions.

Federal investigators say the two white supremacists hoped media attention given to their hate crimes would spark a revolution.

Pedersen is scheduled to stand trial in U.S. District Court in Portland in July. It’s not clear from her written plea agreement with federal prosecutions, but Grigsby could be called as a prosecution witness and forced to testify against her boyfriend.

Pedersen already has pleaded guilty in Washington State and was given two life sentences for fatally shooting his father, David “Red” Pedersen, in the back of the head while he drove the young couple to the bus station in Everett.

Prosecutors in Snohomish County declined to seek the death penalty after an investigation revealed “significant and credible” evidence that Red Pedersen had sexually abused his children and others decades ago, the Everett Herald reported. DeeDee Pedersen wasn’t married to Red Pedersen at the time and had nothing to do with the abuse, prosecutors said.

After the couple was killed, Joey Pedersen and Grigsby fled to Oregon, where they are accused of killing 19-year-old Cody Myers, who they mistakenly thought was Jewish. Later, they allegedly shot and killer Reginald Clark, a disabled black man, in Eureka, Calif.

The all-inclusive racketeering charge alleges the pair committed various criminal acts in Washington, Oregon and California including murder, kidnapping, use of firearms during crimes of violence, transporting a stolen vehicle, unauthorized use of bank cards, aggravated identity theft, carjacking resulting in death and felon in possession of a firearm.

As part of the alleged enterprise, the two “would identify, kidnap and murder targets on the basis of race, color, religion and perceived ‘degenerate’ conduct to further their white supremacist movement.” The indictment also says Grigsby and Pedersen were involved in “promoting and advancing a white supremacist movement to purify and preserve the white race and ‘reclaim our country.’”