The League of the South (LOS) held another of its anti-immigrant rallies against “Southern demographic displacement” this past Saturday in Tallahassee, Fla. The event targeted Senator Marco Rubio (R-Fla.) for his support of “Third World immigration” and “amnesty.” Making his racist views perfectly clear, LOS head Michael Hill told a reporter, “I’m standing up for my people – white Southern people – no one else.”

The Florida event was just the latest in a series of protests the group has held in places such as Georgia, South Carolina and Tennessee. And it seems that the ranks of protesters become more extreme every time. For the first decade and a half after its founding in 1994, the LOS was known for filling its ranks with PhDs into white Southern history. But starting with their August rally in Uvalda, Ga., it’s more often neo-Nazis and other hard core types who are showing up. 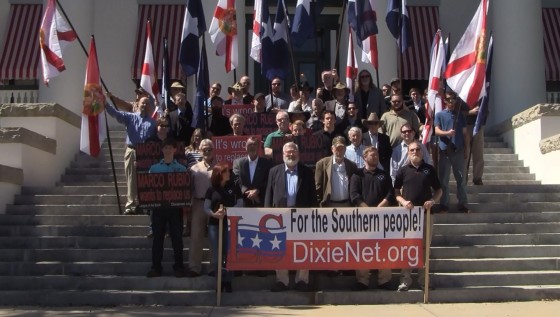 Let’s just take a look at who joined the Tallahassee protest. On hand was Floyd Eric Meadows of Acworth, Ga., who was once in the Klan and had a picture on his Facebook page wearing an SS bolt patch and a 1488 patch. Gina Brashear of Fort Myers, Fla., who likes to “like” pictures posted on the LOS Facebook page, was there, too. Brashear has a long history in white supremacist circles, having posted in 2008 that she has been “a member 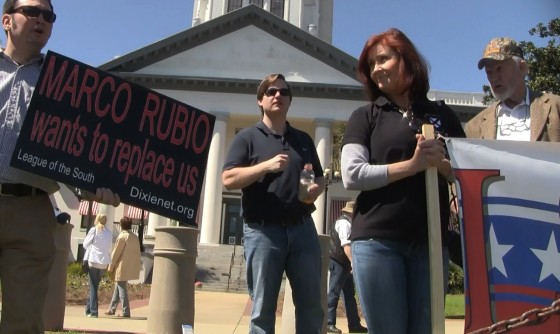 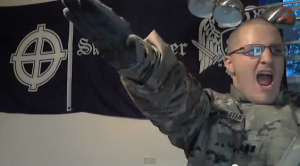 Jereb’s partner in the ROF is Nicholas Jordan. He’s featured on the ROF website leading an urban training march. Jordan lists as friends on Facebook, anti-Semite Matthew Heimbach of Paoli, Ind., and Bradley Dean Griffin of Midway, Ala., who was also at the protest and runs the racist website Occidental Dissent. Another supporter of the militia and the LOS who was at the event is Richard O’Cell Snider. He distributed the LOS’s Free Magnolia publication in Tallahassee and runs the secessionist Florida Fire-eater blog.

The militia appears to be close to longtime LOS Florida leader Michael Tubbs, who has an ugly criminal past of his own. In 1987, Tubbs and another Army Green Beret, toting automatic weapons fitted with silencers and dressed completely in black, robbed two fellow soldiers of their M-16 rifles during a routine exercise at Fort Bragg, N.C. “This is for the KKK,” the holdup men shouted as they fled. 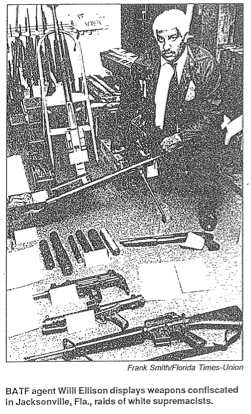