Kyle Hunt had grand visions of thousands of white men coming out of the woodwork this weekend to stand up and defend their interests in a public march that would grab the nation’s attention. Like a lot of such plans, things didn’t exactly work out that way.

Hunt, a 30-year-old former Google employee currently living in Massachusetts, promoted the “White Man’s March” this past weekend through a variety of white supremacist outlets, including his own outfit, Renegade Broadcasting, an Internet radio station devoted to covering “the destruction of the white race.” The plan was to hold the main event in New York City, with satellite marches occurring in various other cities around the country.

The marches, Hunt claimed, were a response to fears that white people are being "mocked, displaced and violently attacked" through an insidious liberal idea known as "diversity." 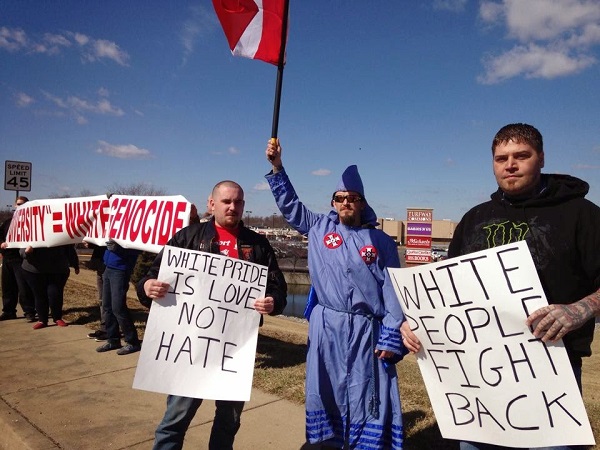 But no one seems to have actually marched in the "#whitemanmarch." It was more of a series of brief banner displays and Twitter photo postings of racist flyers and stickers affixed to various objects around the country. The banners were large red-and-white affairs reading “Diversity = White Genocide”.

Hunt argues that the “‘diversity’ agenda is being directed at white countries (and only at white countries) with various programs to ensure that there are less white people at schools and in the work force, which is unfair and discriminatory.” It is "taking away money and opportunities from the White citizens," he says.

The New York event ran into trouble when it emerged that Hunt was attempting to tie his Saturday “march” with the annual St. Patrick’s Day Parade in New York, scheduled for the same weekend. His plans were roundly denounced by angry Irish Americans and parade organizers.

Hunt told the press beforehand that he expected “thousands” to participate. On Saturday, only a smattering of attendees showed up in New York. There were similarly tiny gatherings in Florence, Ky., Tempe, Ariz. and Birmingham, Ala., where police took down the “Diversity” banners. Demonstrators also showed up in Branson, Mo. and Olympia, Wash.

As much as anything, the march was the subject of open mockery, especially on social media and the Internet. On Twitter, people flooded in with derisive tweets, some of which were so hilarious they were collected at Salon.com, City Guide and elsewhere.

Reactions from white supremacists to the low turnout and poor press coverage was mixed. Robert Whitaker, of "mantra" fame, complained that his "white genocide" message had been inappropriately commandeered and that the event was not inclusive of women. "The White MAN’s March was a hijack. White people come in two sexes," he wrote Sunday.  Whitaker also chided the concept of taking to the streets as something "out of the 30's."

Other racists were critical of the Klansmen who showed up to participate at a protest in Florence, Kentucky, organized by former National Alliance leader, Robert Ransdell, particularly since this was one of the few gatherings that generated media coverage.   Skinheads Richard Kidd and Jarred Hensley also attended.

Ransdell defended the Klan's presence and stated his protest was "really a sight to behold, White people in large numbers not even being scared away."

Counting Ransdell, the "large numbers" at his Kentucky event added up to nine, which seems to have been one of the largest White Man’s March gatherings anywhere. The presence of two notorious skinheads and two Klansmen didn't stop Ransdell from taking a victory lap on the racist forums Sunday.

Meanwhile, Hunt is pursuing his next grand vision. He warned one interviewer that he may well be the President of the USA by 2020.