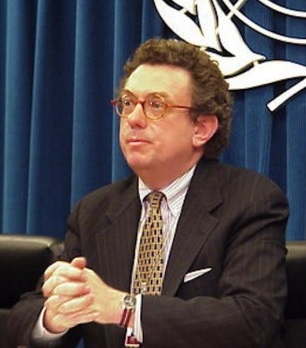 It only took a brief rant to wreck Austin Ruse’s budding career as a “traditionalist” Catholic pundit. Ruse, president of the Catholic Family and Human Rights Institute (C-FAM), an anti-LGBT hate group that lobbies at the United Nations, was on American Family Radio (AFR) last week when he said that the “hard left, human-hating people that run modern universities” like Duke “should all be taken out and shot.”

While violent rhetoric is an increasingly common feature of far-right rhetoric, it is particularly jarring coming from a pundit and think tank official who markets himself as “pro-life” and “pro-family.”

After Right Wing Watch posted Ruse’s rant – and then publicized his self-pitying responses to having his own words played back – Ruse found himself suddenly isolated. The American Family Association – on whose program he made the rant – severed all ties with him, saying: “AFR condemns such comments, no matter who makes them.” One of C-FAM’s board members, Monsignor Anthony Frontiero, resigned from the board after Faithful America petitioned him to do so. And C-FAM may lose its status at the United Nations.

“I deeply regret and apologize for using the expression 'taken out and shot' on the Sandy Rios Show this week. It was not intended to be taken literally. I have dedicated my life and career to ending violence. I regret that these poorly chosen words are being used to attack my friends at American Family Radio and American Family Association.”

Notwithstanding the apology, AFR’s Sandy Rios defended Ruse’s remarks as being “words of life” that warn believers against listening to liberal professors. Rios insisted that Ruse’s words were the kind people make in private conversation all the time, which may well be true around her workplace – AFR is a wing of the American Family Association, whose spokesperson Bryan Fischer has made all manner of offensive and outrageous remarks.

Ruse still appears to have a friend in the Family Research Council (FRC), which prominently featured him earlier this month in a panel discussion on the U.N. Ruse used the opportunity to promote a conspiracy theory (one promoted for some time by C-FAM) that a cadre of United Nations officials were working to make abortion rights a component of every U.N. treaty. He also castigated the U.N. generally as a hotbed of socialism.

Perhaps more noteworthy were remarks by Ruse’s fellow panelist, Pat Fagan of the FRC. Speaking about a U.N. panel that criticized the Vatican over sexual abuse, Fagan compared the panel’s report to Kristallnacht, the night of violence that Nazi Brownshirts subjected Jewish merchants to in November 1933 and which foreshadowed the Holocaust:

FAGAN: This is just an analogy and I don’t want to take it directly, but the first really egregious act that was very public and against the good of people and against the good of the Jews was Kristallnacht in Germany. And that was very significant because the police permitted it. And that was the beginning of the end, when those who were there to enforce the law failed to do so and did not protect the citizen from these bullies – more than bullies, murderers.

Now, this is not Kristallnacht. But it is the breaking of a pretty big window. They didn’t go around smashing all the windows, it’s just that if you think of the Vatican as a shop on Main Street, well, they didn’t break all the windows on Main Street but they went up to the shop and they smashed through the big plate glass window.

Now, this is good, because it is now made very clear what is going on.

In the discussion that followed, Ruse lauded Fagan’s remarks on this point.

Today, Ruse published another mostly self-pitying piece on the fallout from his comment, which he now admits was a “gaffe” (nothing more, nothing less, in his mind). It remains to be seen if Ruse can recover.