To say that there is deep local antipathy to federal wolf recovery efforts in many of the Mountain West states where biologists are attempting to revive the endangered species would be an understatement. Sentiment against the big canine predators in places like Idaho and Montana, especially among cattlemen, often borders on sheer rage.

That has translated, politically, into a situation where lawmakers in Idaho recently approved $400,000 in funding to kill as many as 500 of the state’s estimated population of 650 wolves, leaving as few as ten breeding pairs. The bill was promptly signed into law by Gov. Butch Otter, who has made loathing of wolves a centerpiece of his political image.

Much of the antipathy is predicated on old-fashioned fear about wolves, particularly given their predilection for preying on livestock and family pets in areas where humans inhabit their range, not to mention the potential threat they represent to human life. But there is also a political element, particularly in Idaho, Montana and Wyoming, that is fueled by far-right antigovernment paranoia and conspiracy theories. 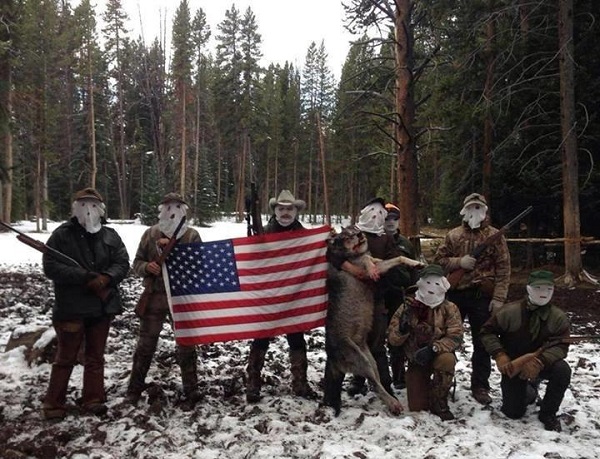 Wolf recovery efforts are frequently depicted as the imposition of the “New World Order” on residents of the rural areas where the creatures roam. A number of far-right outlets, including the John Birch Society’s magazine and the conspiracist website World Net Daily, have run pieces describing how wolf recovery is a key component of a plot by radical environmentalists on behalf of the United Nations to destroy private property rights in America. In the Mountain West, holding such views is not uncommon.

It was while I was covering a Tea Party event in western Montana, in fact, that I first encountered this melding of conspiracy theory paranoia about wolves and far-right political dogma. Several speakers at the event described how wolf-recovery efforts in the region were part of a United Nations-derived plot to control their lives and destroy their property and gun rights, and a booth at the event handed out literature describing the conspiracy.

When militias were first organizing in Idaho and Montana in the early to mid-1990s, much of the anti-government sentiment that drove recruitment revolved around resentment for the just-instituted wolf recovery efforts.

“It was seen as direct government intervention into their way of life and telling them what they had to put up with and what they couldn't shoot,” recalls Amaroq Weiss, Wolf Recovery Director for the Center for Biological Diversity, an environmental organization that has filed numerous lawsuits over the years to prevent the wolf hunts in Idaho, Montana and Wyoming. “So this goes way back. The wolf has always been a surrogate for hatred for the federal government in the areas where the reintroductions took place.”

Sure enough, the conspiracy theorists who fueled the Patriot movement’s militia organizing in the 1990s also used wolf recovery as a recruitment tool. Bob Fletcher of the Militia of Montana was fond of telling audiences in the 1990s that the wolves’ reintroduction was a predicate to the elimination of private property rights, the culmination of which would be the construction of concentration camps in the Northwest woods to incarcerate formerly gun-owning Americans.

The John Birch Society’s house organ, The New American, published an article in 2001 more or less outlining this same conspiracy: “Simply put, the ‘wolf recovery’ program is a form of environmental terrorism. Thus while the U.S. government is working through the UN to fight a war against terrorism abroad, it is collaborating with UN-linked environmental radicals to wage an eco-terrorist campaign against rural property owners here at home.”

Likewise, World Net Daily’s conspiracy peddler in chief Joseph Farah chimed in: “Just because your particular ox is not being gored by these wolves, your turn is coming. Believe me. If western ranchers don’t have any property rights, guess what? Neither do you – no matter where you live. And they’ll be gunning for you soon enough.”

Even an ostensibly “mainstream” organization like Idaho For Wildlife recently featured an anti-wolf recovery screed about the United Nations and the New World Order.

The embodiment of the extreme nature of these sentiments came this winter when a group of men wearing Klan-like hoods posed with the corpse of a freshly killed wolf and an American flag and then posted it on Facebook. The page that published the picture belonged to a couple of Wyoming outfitters, who later explained that they were harkening back to Western vigilantism: “Trying to make a statement!...Frontier Justice! Wyoming hunters are fed up!”