In an amicus brief filed yesterday in federal court in Michigan, the Traditionalist Youth Network (TYN) –– a student organization concerned with promoting white identity –– has taken up the mantle of defending the “sanctity of marriage” against “Culture distorters” who seek to reject “originalism.”

The brief was filed in the case of April DeBoer, a nurse in Hazel Park, Mich., who sued the state after she and her partner, Jayne Rowse, were prohibited from adopting their three children jointly because they did not have a legal marriage. Last week, U.S. District Judge Bernard Friedman ruled in their favor, striking down the Michigan Marriage Act as unconstitutional. But his decision was temporarily put on hold by an appeals court.

The defense of “traditional” marriage represents something of a shift in focus for TYN, which has historically concerned itself with “Tribe and Tradition” and encouraging young people to unite against “decadence, individualism, Marxism and Modernity.” Its co-founder, Matthew Heimbach, rose from the ranks of white nationalism and has aligned himself more closely with racist activists than with conservative groups standing against same-sex marriage. 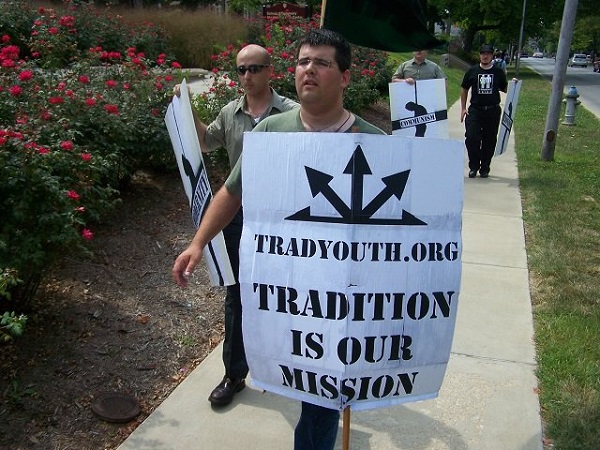 But Matt Parrott, a spokesman for TYN, told Hatewatch on Wednesday that standing against same-sex marriage was well within parameters of the group, even if the majority of TYN’s focus deals with race. “We’re fighting for tradition,” Parrott said. “Traditional marriage is within our sphere of activism.”

“While the appellants will likely not say it as bluntly as this,” the brief said, “the Culture distorters and those who espouse their ideals flagrantly reject originalism and often treat the United States Constitution like an accordion: they frequently stretch it out to invent rights that do not exist –– such as the ‘right’ to have an abortion or the ‘right’ to engage in sodomy or the ‘right’ to view pornographic materials.”

After several telephone conversations between Hatewatch and TYN leaders on Wednesday, Parrott published a short piece titled “TradYouth Stands for Traditional Marriage” on the group’s website to explain the shift.

“The recent campaign in favor of homosexual ‘marriage’ is merely one battle in [the Left’s] generational campaign against the ties that bind our peoples,” Parrott wrote, tying a defense of a traditional marriage to the white nationalist cause. “Our humble organization is joining numerous grassroots conservative and Christian organizations in opposing the Leftists social engineering campaign to destroy every last vestige of Western civilization.”

Surprisingly, the brief lists Kyle Bristow as TYN’s lead attorney. Now practicing in Michigan, Bristow rose to notoriety when he began inviting prominent white nationalists to speak at Michigan State University while he led the Young Americans for Freedom (YAF) chapter there. The pugnacious college student also spearheaded anti-immigrant and anti-LGBT campaigns organized by YAF, prompting the Southern Poverty Law Center (SPLC) to take the unusual step of listing the campus club as a hate group. Bristow soon branched out to violent, hate-driven fiction. While attending law school in 2010, he published White Apocalypse, a novel seething with lethal white supremacist revenge fantasies against Jewish professors, Latino and American Indian activists and staffers of a group clearly modeled on the SPLC. Since then, Bristow has continued to air his extremist views in white nationalist, anti-gay media.

Bristow did not return several calls seeking comment on the brief on Wednesday, and neither Parrott nor Heimbach would comment on what role Bristow is playing in the organization.