Glenn McConnell was selected last Saturday to be the next president of the College of Charleston. McConnell is South Carolina’s current Lieutenant Governor and a veteran of the South Carolina State Senate, where he served from 1981 until 2012. He’s also an avid Civil War reenactor, an active member of the Sons of Confederate Veterans and the former proprietor of a Confederate memorabilia shop.

McConnell’s interest in and promotion of Confederate history and culture have been a hallmark of his three decades in public office – and a steady source of controversy. This history is at the core of the opposition to his appointment among College of Charleston students and faculty.

McConnell made headlines in 2010 when he was photographed in a Confederate uniform posing with two African Americans portraying slaves. And in 2002, McConnell, then one of the most influential figures in state government, came to the defense of racist barbecue baron Maurice Bessinger, owner of the Piggie Park chain. 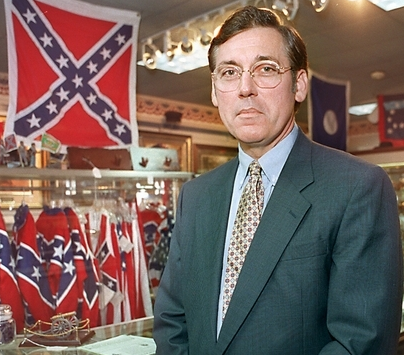 Bessinger was under siege for displaying the Confederate flag and selling racist tracts at his restaurants, including a pamphlet entitled “The Biblical Justification for Slavery.” When South Carolina’s only Fortune 500 company, electric and gas giant SCANA, banned employees from parking company trucks at Piggie Park restaurants, McConnell “threatened a legislative vendetta” against the company if it didn’t reverse course. He called SCANA’s actions a “basic slap at free speech and freedom of expression” and accused the company of “discriminating against a man’s business because of his political beliefs.” (Be sure to check out this old Daily Show clip featuring South Carolina-native Stephen Colbert interviewing both McConnell and Bessinger.)

McConnell established himself as a defender of the Confederacy in 1996 when South Carolina’s Republican governor, David Beasley, proposed removing the Confederate flag from the capitol dome. McConnell denounced the proposal as “cultural genocide” and compared the governor to Neville Chamberlain for making peace with “militants” – in this case, not the Nazis, but the NAACP. Beasley’s proposal failed and he lost his next election, due in part to anger over his proposal. The flag debate went on.

In 1999, the NAACP called a tourism boycott of the state until the Confederate flag was removed. The following year, 50,000 people marked Martin Luther King, Jr. Day by marching to the state capitol and demanding the flag’s removal. McConnell defended the flag as “the emblem of our ancestors” and accused the NAACP of “trying to make the flag a scapegoat for something that existed in history.” “There has been racism all over the United States and it took place without the confederate flag,” he said. Lonnie Randolph, then head of the Columbia chapter of the NAACP, wasn’t buying it: “Saying the flag isn't about slavery is like saying the swastika isn't part of the holocaust. It's a symbol of white supremacy, hatred and oppression – that's why it's used by the Ku Klux Klan and skinhead groups.” 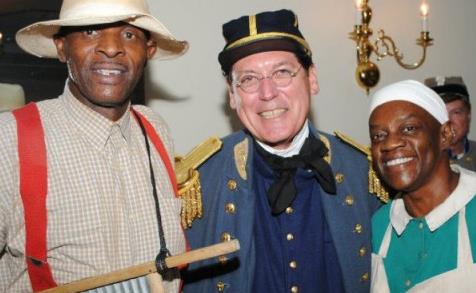 Pressure continued to build on legislators to remove the flag. As then State House Speaker David Wilkins said, “We kept being hit. We were talked about on the national news. We were being described as a backward state.” The NAACP proposed displaying the Confederate flag inside the state capitol in a glass case. “Encasement represents entombment,” retorted McConnell, who said he wanted “no part in symbolically burying the Confederate banner.”

Following a months-long battle in the legislature and aggressive lobbying – with conservative activists and neo-Confederate groups for the flag and civil rights and business groups against – McConnell played a key role in shaping and passing a compromise bill. In July, 2000 the Confederate flag came down from the capitol dome, but a new one was permanently placed out front, at the Confederate Soldiers Monument.

Neo-Confederate groups reacted with outrage at the perceived betrayal by one of their own, but McConnell was proud of his maneuvering: “I always felt the NAACP wanted the flag in marble and glass. We did what General Lee should have done at Gettysburg. We flanked on them. We moved the flag from the dome to the soldier's monument and put the NAACP in a position they cannot sell, which is to remove it totally from the grounds.”

Still, McConnell had his regrets, saying “I wish it could have stayed.” In the end, he determined it “was the best deal we could get under the circumstances that could get bipartisan and biracial support.”

It's the 21st century, but McConnell is still fighting the Civil War (or the "War Between the States," as he calls it). And so too, it seems, is the College of Charleston's Board of Trustees.