FBI agents in Texas have arrested a man who allegedly was plotting to use C-4 explosives and weapons to kill police officers, rob banks and armored cars, and blow up government buildings and mosques, authorities announced today.

Robert James Talbot Jr., 38, of Katy, Texas, was arrested Thursday on federal charges of attempted interference with commerce by robbery, solicitation to commit a crime of violence and possession of an explosive material, the FBI said. 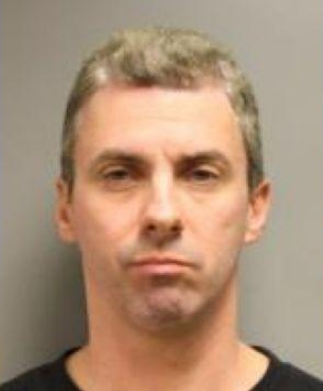 After setting up a Facebook page called American Insurgent Movement (AIM), Talbot allegedly sought to recruit five or six like-minded people who wanted “to restore America Pre-Constitutionally and look forward to stopping the Regime with action by bloodshed.” He wrote this year on the AIM page that he was seeking people interested in “walking away from your life … to stop the regime.”

The crimes Talbot was plotting to carry out — detailed in a six-page criminal complaint filed in the Southern District of Texas — sound eerily similar to a series of terrorist attacks carried out 30 years ago by members of an infamous neo-Nazi group called The Order, also known as the Silent Brotherhood (or Brüders Schweigen in German). There’s just one big difference: Talbot talked about some of his planned crimes on Facebook, the complaint says, while The Order committed murders, robbed armored cars, and carried out a number of other attacks.

Talbot was expected to be held without bond as a flight risk and danger to the community after an initial appearance today before a U.S. magistrate judge in Houston.

Court documents say the FBI opened an investigation into Talbot’s activities last August after learning of his desire to recruit others for terror attacks. The “like-minded” individuals he initially attracted worked for the FBI, it turns out. The FBI used a confidential informant and two undercover FBI agents assigned to the agency’s Joint Terrorism Task Force.

On Oct. 18, 2013, the complaint says, Talbot asked his new recruits about their willingness to walk away from their current employment and join him in robbing banks to fund the revolution he envisioned.

Talbot posted on Facebook that he had gone to four Bank of America branches to "play observation.” Talbot allegedly urged “anyone who robs these banks to kill everyone working for the ‘banking Cartels’ during the heist.”

Talbot’s Facebook post continued: “That is exactly what I will have my men do during the heist. Same goes with the Muslims. Mosques are to be a blast! With three of my guys with FA [full automatic] AK's [AK-47 semi-automatic rifles], we will send that white house worthless piece of dirt and his Muslim brotherhood a message they will never forget.”

Talbot was arrested Thursday after meeting at a storage facility in Houston with three men he believed would help him carry out the robbery of an armored car, using other vehicles to block its path, the criminal complaint says.

A day earlier, one of the undercover agents had provided Talbot with what Talbot believed was C-4 explosive material that was to be used during the robbery of the armored car in the hopes of funding his operation, court papers say. Quite similarly, The Order gang carried out a successful $3.8 million robbery of an armored car near Ukiah, Calif., in July 1984, as well as two other, less successful heists.

On Wednesday, Talbot met with the three men he apparently was convinced would help him carry out the robbery. He was shown “stolen C-4” explosive he had requested, that actually was inert, and eight other explosive devices he had purchased for $500.

“Talbot explained how he would kill the driver of the armor car to prevent the truck from leaving the location,” the complaint says. He also intended to use one of the explosive devices to disable the door-locking devices, allowing the group to steal the money inside the armored car.

At Thursday’s meeting at the storage facility, Talbot produced a “manifesto” and asked one of his co-conspirators, who turned out to be an FBI agent, to read it aloud.

The manifesto said: “We must rebel. There is no other option no. Blood and bullets are the only two things that will change this world, short of divine action.”

As he drove from the storage facility, en route to the planned armored car robbery, Talbot was arrested by agents assigned to the FBI Houston Division and the bureau’s Special Weapons and Tactics team.

Amazingly, Talbot was not very secretive about his plans, with frequent Facebook postings that he hoped would attract people interested in his antigovernment, anti-banking ideas. He began the week, the complaint alleges, with this Monday Facebook posting: “The banking cartel is not going to stop with their agenda, and only we can stop them and their agenda by taking what they loved most and using it against them for our own missions.” He also wrote, “Prove yourself and join my cause which has gone active.”

On Nov. 21, 2013, the complaint says, Talbot created his American Insurgent Movement Facebook page. He went on to describe AIM as “a Pre-Constitutionalist Community that offers those who seek True patriotism and are looking for absolute Freedom by doing the Will of God. Who want to restore America Pre- Constitutionally and look forward to stopping the Regime with action by bloodshed.”

After using Facebook to recruit three followers, who really were undercover agents and an informant, Talbot encouraged them to  “start watching violent war movies to mentally prepare for killing people.”

On Jan. 22, 2014, Talbot met with the undercover agents and told them to start identifying potential banks as robbery targets. He said “wanted to begin robbing banks in order to acquire money to finance the purchasing of better weapons and equipment which he [Talbot] would use to kill law enforcement and government officials in Washington D.C.,” the complaint said.

On Jan. 30, Talbot again discussed his plans on the AIM page, writing: “Liberty movement starts this summer for those who are up for anything. Email the admin if your [sic] interested in walking away from your life (we have weapons if you need a weapon) to stop the Regime. We always will be recruiting. ...You will be giving your life for a greater nation restoring liberty and the Lord himself. Stopping the New World Order and banking cartels.”

The following day, he posted: "Operation Liberty is going in full effect this summer if your [sic] sick of your life style and want to make a difference.”

Sometime in January, Talbot was arrested for drunk driving. During a Feb. 20 meeting he had with the undercover team, Talbot said wanted to “ambush and kill” the officer who arrested him that day. The complaint says Talbot told the undercover agents that he knew where the arresting officer conducted patrols and wanted to kill him “late at night and wait for other police to arrive and kill all of them,” too.

On March 15, Talbot posted on the AIM Facebook page: “In a few weeks me and my team are going active for Operation Liberty. I will not be able to post no more. We will be the revolution, things will happen nationwide or in the states. They will call us many names and spin things around on media. Just remember we fight to stop Marxism, liberalism, Central banking Cartels and the New World Order.”