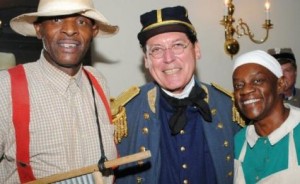 Yesterday, we explored the neo-Confederate record of South Carolina Lt. Gov. Glenn McConnell, who was recently selected to be the next president of the College of Charleston. As I noted, McConnell has made promotion of Confederate history and culture a hallmark of his three decades in public office.

That helps explain how, in 2007, then-State Sen. McConnell came to appear on a notorious white nationalist radio program – the Political Cesspool – that hosts the likes of David Duke, the former Grand Wizard of the Knights of the Ku Klux Klan. According to the program notes, McConnell appeared during Confederate History Month to discuss the “legacy of the crew of the C.S.S. Hunley submarine as well as the flying of the Confederate Flag on the grounds of the state capitol.” He was described as “very much pro-South.”

The Political Cesspool, hosted by James Edwards, declares in its “mission statement” that it represents “a philosophy that is pro-White” and aims to “revive the White birthrate above replacement level fertility and beyond to grow the percentage of Whites in the world relative to other races.” On the same page, you’ll find an endorsement from Bob Whitaker, a segregationist radio show host, who praises Edwards for giving voice to the “legitimate complaints that gentiles have and our fear of the genocide of immigration and intermarriage.”

The program has hosted a who’s who of white nationalists, racists, anti-Semites and far-right figures. Edwards believes that “Secession is a right of all people and individuals” and uses his show to honor “those who tried to make it successful from 1861 – 1865.” As part of that effort to “honor” Confederate veterans, Edwards brought McConnell on during Confederate History Month.

McConnell told the Charleston Post and Courier yesterday that the only people still debating the Confederate flag at the South Carolina capitol are extremists on both sides. “I'm not going to go back and open up old wounds,” he said. Yet there he was in 2007 attacking the NAACP over the flag issue on a white nationalist radio show.

McConnell, asked by Edwards to lay out the history of the flag debate, said the state hoisted the Confederate flag to mark the centennial of the Civil War. “Nobody had a problem with it until all of a sudden, I believe it was in the 1980s, the NAACP discovered that they were offended by it,” he said. “In the year of 2001, we agreed to remove the flag from the top of the capitol.”

McConnell said they “had biracial and bipartisan support for that, and everybody was happy, but the NAACP.” “Now they come back and they argue they want it taken off the grounds because it’s Confederate.” “For all fair-minded people the controversy was resolved long ago.”

But McConnell said the NAACP was “returning to the trough of controversy, they’re trying to feed on passions, they’re appealing to prejudice and they’re trying to inflame constituents and citizens across our state.” “What’s sad about that is that irresponsible grandstanding threatens to unravel the fabric of mutual respect and to divide our state for decades to come.”

Well, isn’t that rich. There’s nothing like going on a white nationalist program called the Political Cesspool to nurture the “fabric of mutual respect” and attack the NAACP for “fanning the flames of intolerance.”