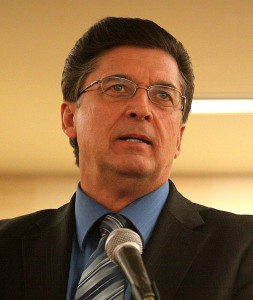 Richard Mack, the former sheriff of Graham County, Ariz., and an antigovernment “Patriot” movement figure who leads the Constitutional Sheriffs and Peace Officers Association, has a long history of promoting the theory that county sheriffs, not federal law enforcement, represent the supreme law of the land. This radically decentralized vision of government was first promoted by the old far-right Posse Comitatus movement.

Mack shot from obscurity to right-wing stardom in the mid-1990s when he challenged the Brady Handgun Violence Prevention Act and won a victory in the U.S. Supreme Court that weakened the law. For the past two years, he has zigzagged across the country spreading conspiracy theories about the federal government and promoting his organization as a “line in the sand” against government agents.

Mack did not disappoint, telling Dobbs that in order to “save America”, county sheriffs need to refuse to obey federal gun laws. He hinted, as he often does, that civil war might result if they fail to do so.

The legislation that sparked the segment was a set of local ballot items approved by voters in Burlington, Vt., in early March. The ordinances, which do not involve state or federal authorities, “allow police to seize weapons from suspects of domestic violence, ban firearms from any city establishment with a liquor license and require gun owners to safely store all guns.”

Last night’s segment began with Dobbs describing the Vermont ordinances as “Obamaesque.” Then Mack started into a diatribe about radically decentralizing government to “take America back”:

MACK: Well, we want the borders protected. They ignore the immigration laws, and they do pick and choose quite often. But we don’t want to pick and choose. We want the Constitution enforced by those in local and municipal jurisdictions who swore an oath to do just that.

If we’re going to take America back, then we must do so one county at a time, sheriff by sheriff.

Then Mack railed against the federal government, which he said has “raids going on against honest American citizens all the time.” He told Dobbs that “we’re not trying to cause civil war or revolution,” but that the only peaceful way of saving America is through nullification:

MACK: This isn’t just a mess anymore, Lou. This is America dying. And we can save her. And we can make it all peaceful if we have sheriffs and local officials that will just tell the federal government, “There’s a few things you’re not gonna do here.”

Dobbs never bothered to ask Mack how he could argue for local control while trying to undermine local control in Burlington. That would be too much to expect.