City officials in Leith, N.D., are now openly challenging a misdemeanor plea bargain tendered to white supremacist Craig Cobb whose attempt to build a whites-only community fizzled when he was arrested on seven terrorizing charges.

Instead of facing the possibility of years in prison for felony convictions, Cobb faces only a short sentence if a judge accepts the misdemeanor plea bargain.

The complaint, sent to the North Dakota Bar Association, Gov. Jack Dalrymple and Attorney General Wayne Stenehjem, accuses Schwarz of unprofessional conduct and demands he be replaced with a special prosecutor. The complaint contends the prosecutor didn’t consult with all the victims, including the mayor and Bruce, and that he used vulgar and unprofessional language during interviews with other victims.

It is the latest development that has turned the tiny North Dakota town, 30 miles from Bismarck, into a microcosm of hate in America and how government officials and the criminal justice system deal with it. Since Hatewatch first reported on Cobb’s plans to take over the town and turn Leith into a whites-only enclave, there has been subsequent media attention. The BBC has documented the flap, and National Geographic is scheduled to air a special report later this spring.

Bruce, who told Hatewatch today he has exclusive authority “to speak for the city,” said that he, the mayor and city councilman are outraged that Cobb was offered a get-out-of-jail plea bargain.

“We think he should go to trial and let a jury decide if he’s guilty or innocent of these felony terrorizing charges,” Bruce said. 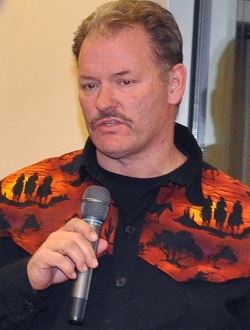 “The three of us feel this is a travesty of justice … and (believe) the charge should be reinstated,” the written complaint says, adding: “We request that a ‘special prosecutor’ be appointed to have Craig Cobb brought to trial and there be no plea deal offered.”

The three city officials say in the complaint that their lives have been “greatly impacted” by the events. “We have received numerous death threats by supporters of Craig Cobb and Kynan Dutton as well,” the complaint says.

Schwartz, who has called the Cobb affair in Leith “a media circus,” did not immediately responded to a request for comment about the complaint filed against him.

At a February hearing, a judge didn’t accept the misdemeanor plea deal, but ordered another psychiatric evaluation of Cobb and asked that a presentence report include detailed interviews with his alleged victims. That process is ongoing, and a date for the next court hearing – where the plea will either be accepted or rejected by the judge – hasn’t been set.

The mayor and Bruce were among seven victims identified in seven “terrorizing” felony charges filed against Cobb after he and fellow racist Kynan Dutton marched through the streets of Leith on Nov. 16, carrying rifles and screaming profanities.

Cobb called it a safety patrol, but the event quickly landed him and Dutton in jail.

Less than a week earlier, it was revealed that Cobb – a neo-Nazi who hates African Americans and Jews – had submitted to a DNA test that shows he is 14 percent sub-Saharan African.

After his arrest, Cobb pitched the plea deal, offering to sell his property in Leith and leave the state if prosecutors dropped criminal charges.