Not every gun-worshiping, Second Amendment-quoting “Patriot” thinks it’s a good idea for militia members to descend armed to the teeth on the Nevada desert to confront a small army of federal agents and stand with a defiant rancher fighting for his “right” to illegally graze his cattle on environmentally sensitive government land.

Take the gray-bearded host of Resist the Tyranny channel on YouTube, who looked into the camera the other day and declared that when the militiamen “show up with their guns and get killed” the feds will be able to say “it’s a bunch of half-cocked miscreants from a fringe group of radicals” and “they’re going to be right – and you’re going to be dead.”

The host, who only identifies himself as Matt, said he was alarmed at what he was seeing and hearing on YouTube and social media about the weeklong standoff between dozens of federal agents and cattle rancher Cliven Bundy and his growing number of supporters, many of them armed, and with more reportedly on the way."Some people have even planned for offensive strikes during the day,” Matt said on his show, sitting at a table in front of a Don’t Tread On Me flag and a poster that said “2nd Amendment America’s Original Homeland Security.” 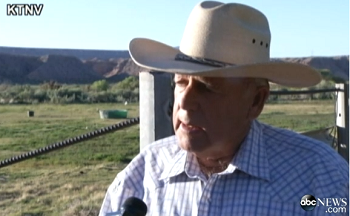 “This is not somewhere we’re going to win by another show of force,” he said. “There will be a time for that. That time is coming, but this is not it.”

Matt said the militia and Patriot movements had to get “the court of public opinion” on their side first, “because until that happens we’re going to lose no matter what.”

He said he knew, however, that his opinion would not be popular “amongst the chest thumpers.” But confronting an army of heavily armed federal agents with militiamen with little training or experience would be a disaster, he said.

“One person even said, ‘I’m all in for it, but I need a ride,’” Matt said. “Really? This is the great group that is going to start the revolution?”

While in the minority, Matt’s was not the only voice expressing caution from the right.

“One of the great failings of our side is a seeming avoidance of learning from the past, or learning from our enemies,” Bob Wright of the 1st Brigade, New Mexico Militia, told the Patriot-run blog Sipsey Street Irregulars. “Revolution is not going to spring whole from the desert floor in Nevada. If one were to judge from the angry posts on social media millions of patriots are just waiting to take a sack of beef jerky and Daddy’s 30.30 and rush off into full blown armed conflict with leviathan.”

Speaking of lessons of the past, as militia members flock to the Bundy ranch about 80 miles northeast of Las Vegas, they might want to recall the name Linda Thompson.

Proclaiming herself “Acting Adjutant General” of the “Unorganized Militia of the United States,” in 1994, Thompson issued a call to arms similar to the one screaming across social media today.

Thompson wanted her unorganized but weapons-bearing army to invade Washington, D.C., and demand the repeal of the North American Free Trade Agreement and the Brady Bill, a gun control measure. U.S. senators and congressmen who refused to accede would be arrested, tried for treason and, if necessary, executed by firing squad or hanging, she said.

Thompson’s plan was almost universally denounced by right-wing groups, including most of the militias that were then appearing all over the country, who accused her of attempting to lead them on a suicide mission. Many in the movement suspected that Thompson was an agent provocateur working for the government.

One of rancher Bundy’s 14 children seems to be concerned that the angry posts flying around could turn into angry action.

The Sipsey Street Irregulars blog quoted an E-mail from the leader of another Patriot group, the Oath Keepers’ Stewart Rhodes, who is at the Bundy ranch “standing vigil.” Rhodes said Bundy’s son, Ammon, asked him to pass along some rules to supporters coming to Nevada.

“This is a protest by rural Americans,” the E-mail said.

“Any rifles people may have with them,” the rules state, “need to stay in the vehicles.”

Judging from television news footage from the standoff, that rule is already being ignored.