Bunkerville, Nev. – With tensions spiraling out of control, and armed militia screaming in defiance of law enforcement ordering them to disperse from federal lands, the week long turf battle between a Nevada rancher and the Bureau of Land Management (BLM) ended Saturday in an increasingly tense game of chicken.

After a week of defiant posturing from both sides, the end began when Clark County Sheriff Doug Gillespie came to a protest area to have a “public discussion” with rancher Cliven Bundy over the BLM’s actions to remove about 900 cattle from about 500,000 acres of public lands, known as the Gold Butte. Gillespie told the crowd to raucous cheers that the BLM was ending its operations trying to enforce a court order to remove the cattle. But instead of viewing that as a victory in what many have called a “range war,” Bundy responded with demands of his own. 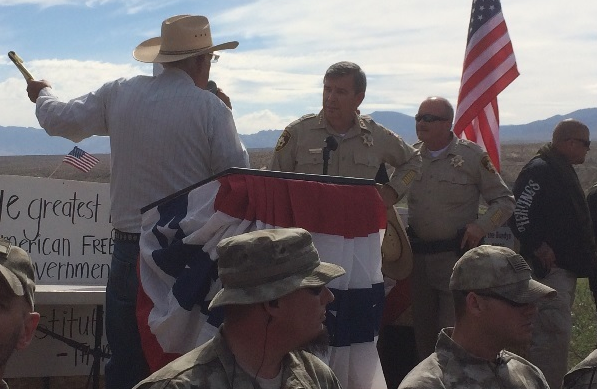 The federal government had one hour to disarm its agents, remove BLM equipment from the area, release his cattle and end what he had come to describe as a tyrannical campaign of harassment against his family, Bundy said. “You report back to these people, we the people, in one hour,” he ordered. And as the deadline neared, Bundy promised the heavily-armed crowd of thousands, whose cheers were filled with condemnations of federal authority, that, “We’re about to take this country back by force.”

With the desert sun high, about two dozen cowboys on horseback appeared in a cloud of dust on the hills above the protest area, ready to ride about three miles away to take Bundy’s cattle back. “Until the cows come home!” the crowd cheered. Meanwhile, antigovernment “Patriot” groups such as the Oath Keepers, grew only more excited. Wiley Drake, national chaplain for the Oath Keepers, said the time had come to no longer bow to President Obama, whom he called a “half-breed.”

The core of the tension is Bundy’s ongoing claim that he has the right to graze his cattle on a sensitive piece of southern Nevada’s Mojave Desert known as Gold Butte. Bundy’s family has grazed cattle in the area for generations, but in 1993 Bundy stopped paying his fees on the land, claiming that the United States government was not the legitimate landlord. About the same time, he began filing court documents that read very much like those now popular with the antigovernment “sovereign citizen” movement. Then, last year, a federal judge enjoined him from continuing to run his cattle on the federal lands, an order he has studiously ignored.

So when federal authorities moved into the area this week and began sweeping up Bundy’s trespassing cattle, Bundy threatened a “range war” if BLM agents took custody of his stock. He called them “cattle thieves.” But, initially at least, the threats fizzled as the roundup of Bundy’s cattle proceeded apace, accompanied by a heavy law enforcement presence at the scene, while Bundy sputtered helplessly on the sideline. 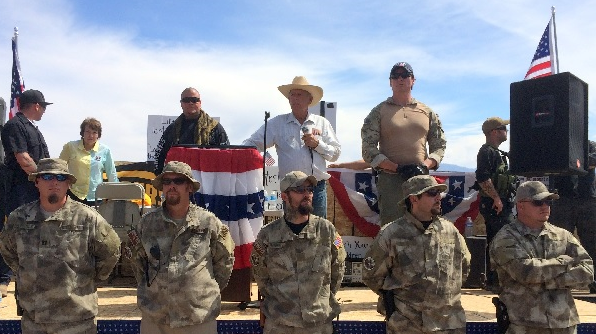 Then, on Wednesday, the confrontation escalated into a brief dust up between federal law enforcement officers and the protesters, including Bundy’s son. During the ruckus, caught on video, Bundy’s adult son, Ammon Bundy, was shot with a stun gun that bloodied his shoulder. Eventually the officers retreated, amid much celebration by the protesters.

With those events fueling a growing sense of rage –– and a heavy Patriot presence to ensure it lasted –– Bundy’s family and supporters on Saturday stood at the gates the BLM had constructed to hold his cattle, vowing not to leave despite repeated warnings to disperse through loud speakers by law enforcement in riot gear. The demands only energized the crowd, who inched closer –– some with rifles raised.

In the end, it was that audacity, fueled by the presence of angry militias and members of the Patriot movement, that led the BLM to stand down. After a week of trying to enforce a court order to remove the cattle, bureau officials said they would not.

“Based on information about conditions on the ground, and in consultation with law enforcement, we have made a decision to conclude the cattle gather because of our serious concern about the safety of employees and members of the public," BLM Director Neil Kornze told ABC News.

Undoubtedly, the day was a major win for the Patriot movement, which draws animation from such fears that a tyrannical federal government has begun winnowing away the rights guaranteed citizens in the U.S. Constitution. (The BLM taking Bundy’s cattle only enforced those fears.) Infowars.com, the conspiracy theory factory led by Alex Jones that warns of a coming police state, as of Saturday night, had already reported that their exclusive report connecting the BLM’s action to “a Chinese-backed solar farm” ultimately resulted in the BLM backing down.

Despite the day’s events, it remains unclear what will happen now. BLM officials say that Bundy still owes more than $1.1 million in unpaid grazing fees, and his cattle have only been returned to the land that began the conflict in the first place. Telephone messages left Saturday with the BLM and the Bundy family were not returned.