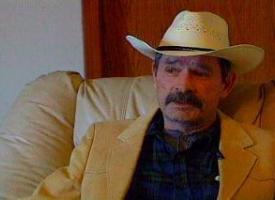 A day before he allegedly went on a weekend killing spree targeting Jews, Frazier Glenn Miller publicly discussed talking by phone with another white supremacist who wanted to turn a small North Dakota town into a whites-only enclave.

But that is only one of 12,683 anti-Semitic, racist Internet postings Miller has made on one racist site alone – the Vanguard News Network – in the past decade.

In other postings, Miller has discussed the potential impacts if President Obama and former Secretary of State Hillary Clinton were both assassinated.  In another post, Miller applauds a recent commentary by Pat Buchanan who said Russian president Vladimir Putin is merely protecting the ethnicity of Russians in his standoff with Ukraine, comparing Russia with Israel protecting Jews worldwide.

It’s his most recent posting – just a day before the shootings – about his conversation with fellow racist Craig Cobb that likely will get the attention of the FBI.  Agents likely will pay Cobb a visit in his North Dakota jail cell, asking if Miller gave any hint about what he may have had planned for Palm Sunday, the day before the start of Passover.

On the VNN Forum, Miller, using the screen name “Rounder,” posted a public message claiming that he had received a phone call on Saturday from Craig Cobb, who is in jail in North Dakota.   Outgoing calls from the jail are logged, perhaps even recorded, so that evidence likely will be of interest to investigators.

Cobb has made his own headlines in the past six months.  He is in jail on seven charges of terrorizing people last November when he and a fellow racist walked through the tiny town of Leith, N.D., where they were buying up homes in a failed attempt to create a whites-only town.  He apparently is among Miller’s shortlist of white nationalist heroes.

On the VNN Forum on Saturday, Miller told his fellow racists of his conversation with Cobb, saying he “sounded confident and healthy” and explained that his presentence investigation is completed as he awaits sentencing in the coming days.

“I made him promise to visit me IF and WHEN he can,” Miller wrote in his VNN posting.

Miller wrote that he asked Cobb if any Vanguard News Network members “had written or sent money in the past few weeks.  “He said none, except for ‘Paul’ who writes him and also sends him $100 bills.”

To that, Miller offered thanks to “Paul,” whom he said is a white nationalist “with initiative and the will of his convictions.”

Like he usually does, Miller signed off his VNN posting about Cobb by quoting Voltaire:  “To learn who rules over you simply find out who you are not allowed to criticize.”

His racist rants and Internet postings go back at least a decade and are laced with anti-Semitic, anti-black and anti-government messages, largely built around the racist philosophy that the government is ZOG – a Zionist Occupied Government, or as Miller apparently prefers, JOG – Jewish Occupied Government.

In a Feb. 9, 2008, nine months before Barack Obama was elected the first black president of the United States, Miller wondered aloud what the reaction would be if Obama or Hillary Clinton were assassinated.

“I mean considering the n----- reactions to the assassination of Martin Looter Koon in 1968,” Miller wrote.  “Remember ?? N------ rioted, burned, looted and violently attacked whites all over the country, and in more than a thousand towns and cities.”

His post continued:  “I "fear" that if Obama suffered a like fate now, the riotings (sic)  would be far worse, and considering the large numbers of n------ and assorted shitskins now in the military, reserve, national guard, and law enforcement, many of whom would join in the riotings, while their white peers deserted their posts to defend their own families, it would be impossible for the ZOG to restore order.”

Consequently, Miller predicted,  “race wars would engulf the entire country in a matter of days.

“The ZOG couldn't even control the n------ during Katrina or during the Rodney King riots,” Miller wrote, adding: “Just imagine The Barack Obama Riots.

“Furthermore, to stir the shit even hotter, suppose both Obama and Hillary were assassinated the same year, say a few months apart,” he wrote.

Strom, like Miller, has had past affiliations with the now largely defunct National Alliance, once the largest neo-Nazi organization of its kind in the United States under the leadership of the late William Pierce, who appears to be one of Miller’s heroes.

In another Vanguard posting on March 18, Miller seems to suggest that the Russian president is the target of international Jewish interests, referring to a recent column by conservative columnist Pat Buchanan.

Miller said he agreed with Buchanan who described Putin as “a blood-and-soil, altar-and-throne ethnonationalist who sees himself as Protector of Russia and looks on Russians abroad the way Israelis look upon Jews abroad, as people whose security is his legitimate concern:

“In my opinion,” Miller wrote, “this statement by Buchanan provides an extremely deep insight into jewish influence over Russia today. Buchanan does not name the jew, but I don't believe he lies. Therefore, his above statement reflects what he truly believes. And I'll add, it brightened my day.”

“We can now more accurately and confidently analyze the situation in Ukraine and Crimea,” Miller wrote.  “I also believe that lots of gentiles in high places also read Buchanan's articles these days. They too will now be a bit more enlightened by knowing that Russia is not yet a JOG, and that Russia is most likely ruled by an anti-JOG.”

“China too is watching,” Miller continued. “Perhaps, they are pulling for, and supporting Putin, since they know they'll be the next target of Big Jew and his JOGs, if Russia loses.”

His anti-Semitic tones came through clearly in a Nov. 29, 2012, posting on the same Vanguard site where he was responded to another poster, offering advice.

“You might begin by saying: ‘All you gals who believe that jews are god's chosen people oughta change your religion to judiasm (sic), or explain to me right now, why not.’

“Another good one is: ‘Since jews don't believe in christ, doesn't that mean that all those millions of dead jews, are burning in hell right now? You have a golden opportunity for great fun, in any case.