White supremacists began pointing fingers almost immediately after the lethal rampage at two Jewish community centers in Kansas by longtime white supremacist Frazier Glenn Miller (aka Frazier Glenn Cross). Some supported Miller or blamed Jews for the attack, while others disavowed him.

Meanwhile on the mainstream right, several leading conservatives attempted to blame liberals for the massacre. Specifically, they pinned the blame on a single liberal journalist, Max Blumenthal, because Miller on a handful of occasions praised Blumenthal’s against-the-grain reporting on the right wing in Israel. From there, they blamed liberal organizations more broadly for the incident, including one for whom Blumenthal has not worked for since 2009. 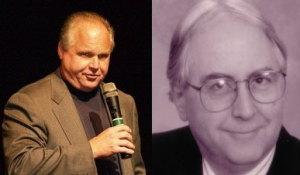 Leading the charge was Rush Limbaugh, who on his widely syndicated radio show Monday cited a column by Ron Radosh at PJ Media – headlined: “Who Inspired the Nazi Klan Leader’s Actions in Kansas? The Answer Here” – that detailed a handful of Miller’s characteristcally expletive and hate-filled rants that approvingly cited Blumenthal’s criticism of Israeli policies.

LIMBAUGH: Max Blumenthal is the son of Sidney Blumenthal, who is, of course, Hillary Clinton's confidant.  But Max Blumenthal, if I'm not mistaken, works at Media Matters for America.  And Max Blumenthal is one of a cabal of left-wing journalists that despise Israel, and this guy found his way to things that these people had written, and he was inspired. He admits he was inspired by all this, and that's why he took action against the three Jewish people in Kansas City.

This is preposterous and blatantly false. Where to begin?

Blumenthal, who is of Jewish descent and has spent years off and on in Israel, does not “despise” Israel. Blumenthal has written a number of articles that criticize Israeli policies, just as Rush Limbaugh regularly criticizes the policies of the United States. Does that mean Limbaugh “despises” America? Of course not.

What’s more, there is no indication whatsoever that anything Blumenthal wrote “inspired” Miller.

At any rate, this guy, Glenn Miller, is a former KKK member.  He once ran for office as a Democrat. All the KKK are Democrats.  They always have been.  He's an anti-Semite, obviously, and he did shout "Heil Hitler" when he was arrested, and this is what has been posted by him. These are apparently some really wacko extremist, pro-Nazi, anti-Semitic websites, and this guy's posted plenty there where he identifies the people who inspire him.  He mentioned the name Max Blumenthal.

Limbaugh wrapped up the episode with this: “You got a former KKK member, literally insane, run for office as a Democrat, inspired by some people at Media Matters.”

Limbaugh, speaking on Monday, was wrong at just about every turn. He said that Miller stabbed three people, but everyone knew by Sunday night that three people had been shot to death. He claimed that Miller was a “huge Democrat” – in reality, he ran for office as a Democrat and a Republican and had no connections or success in either party. And Blumenthal does not work for Media Matters – he was a staff writer there from 2008-9.

Notwithstanding Radosh and Limbaugh’s lies and distortions, their attacks on Blumenthal spread quickly throughout the right-wing echo chamber, especially at neoconservative websites where Blumenthal is the subject of frequent attacks for his criticism of Israel (particularly his book-length expose of the Israeli right, Goliath: Life and Loathing in Greater Israel). At the the Washington Free Beacon, an unbylined story headlined “Kansas KKK Shooter Cited Max Blumenthal” claimed that it found “over 300” references to Blumenthal at VNN. 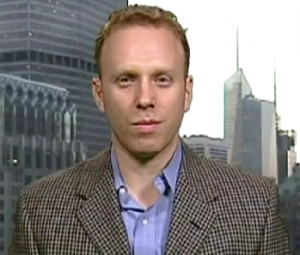 Even liberal, pro-Israeli publications such as Haaretz ran with the smear. That paper published an article headlined “Kansas Murderer Admires Prominent Israeli Critic” and citied the Free Beacon piece, though it was eventually taken down by the editors of the paper due to its dubious claims.

In reality, as we have detailed at Hatewatch extensively, Miller was inspired by the far-right, white supremacist ideology he adopted in the 1970s, which included racial and ethnic hatred, homophobia and a emphasis on violence (as he explained last fall to the Southern Poverty Law Center). Miller was willing to appropriate any piece of information from any source that might help prove a point he wanted to make, and that included various “liberal media” and “Jew reporters,” as he typically referred to Blumenthal.

Miller had a history of violence and was ginned up by the ceaseless drumbeat of racial hatred that he bathed in daily at the Vanguard News Network. Any attempt to characterize his motives as deriving from “liberal” sources is an attempt to turn public understanding of the wellsprings of this kind of violence on its head.

Blumenthal is anything but a revered or celebrated figure on the far right, considering he spent many years writing exposes of far-right American extremists before turning his attention to their counterparts in Israel. In fact, he is widely reviled by users of VNN and related hate sites.

Alex Kane and Phan Nguyen at Mondoweiss performed a search of the various references to Blumenthal at these sites and found that the following descriptions were far more typical:

Kane and Nguyen also examined the Free Beacon claim that VNN referenced Blumenthal over 300 times and quickly ascertained that the references actually numbered closer to 40. And the vast majority of these, in fact, were viciously disparaging references such as those above.

Moreover, picking Blumenthal out of the literally thousands of various people and organizations who Miller cited over the course of his many years of hatemongering is mostly an exercise in selective blame-laying, considering that Miller was far more likely to approvingly cite the works of ostensibly mainstream conservatives. These include such neoconservatives as FrontPage.com editor David Horowitz, a close associate of Ron Radosh’s. In one post, Miller describes Horowitz as ”one of those jewish (sic) neocon ‘new friends’ of the White man who actually throws Whitey journalistic bones from time to time, such as his book ‘Hatin Whitey.’”

Indeed, Horowitz’s publication has apparently condoned Miller’s behavior in the past – notably, his role in the 1979 Greensboro Massacre, in which Klan members shot and killed five protest marchers. Miller was a leader of that massacre and did no prison time. A 2004 FrontPage review of a book about the incident blamed the victims for the massacre because they were Communists, and ultimately praised the KKK and neo-Nazi perpetrators: “In this war they were the patriots fighting an anti-American threat that was global in scope.”

Ironically, a recent FrontPage article not only blames Blumenthal for the Kansas shootings – once, again, because Miller had cited him – but concludes that his greatest dream was realized by the killing of Jews (though in fact no Jews were killed in the incident). It does not mention that David Horowitz was cited and praised even more fulsomely by Miller. And Haaretz, as Kane and Nguyen note, was cited 11,500 times at VNN.