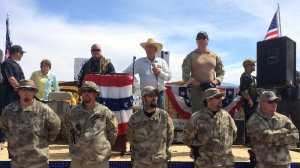 On the Friday edition of “All In” on MSNBC, host Chris Hayes asked the Southern Poverty Law Center’s Mark Potok if that was the right term to use. He explained that Reid was not far off:

POTOK: Well, they’re not quite domestic terrorists, not yet. But you know, I’ve seen the pictures, they weren’t merely sitting up overlooking law enforcement officers with their sniper rifles, they had them trained – scoped rifles trained on the heads of law enforcement officials. I mean, you know, they were a split second away from real bloodshed, and bloodshed that was entirely provoked by the Bundys and the Bundys’ supporters.

Earlier in the segment, Hayes hosted Nevada Republican Assemblywoman Michelle Fiore, a Bundy ally and one of the mainstream political figures who has been on the scene in Nevada, supporting the “Patriots” in defiance of federal authorities. Hayes tried to pin Fiore down on whether she believed federal authorities had the right to confiscate Bundy’s cattle, considering they had a court order in hand – Bundy has been adamant that he does not recognize the federal government as a legitimate entity – but Fiore was evasive on the point, claiming instead that the feds had mishandled the situation by coming in with guns after Bundy threatened a “range war.”

HAYES: Do you agree with that stance? Do you recognize the authority of the federal government?

FIORE: I recognize our federal government overstepped and overreached in our state of Nevada. That’s what I recognize. I recognize we have a lot of issues to conclude. We also have the spotlight on Nevada right now, looking at the way BLM had zero stewardship in herding cattle, slaughtering cattle. That’s what I’m recognizing.

I’m recognizing what I’ve seen. This is my sixth day on the ground here in Bunkerville, and I’m recognizing that this was handled totally incompetent, I’m questioning the BLM and I’m also going to request either a resignation or termination of the person that had ordered this to be done.

FIORE: Oh, I recognize the authority that they’ve -- they believe that they have. I just question it.

HAYES: So you do not -- you agree with Cliven Bundy the federal government does not have authority over the land and over the taxpayers of Nevada.

FIORE: No. Chris, don`t put words in my mouth. I’m not saying I agree with Cliven Bundy. What I’m saying is the way this was handled is really suspicious. When in the heck do we send our federal government with arms to collect a bill? When do we do that?

Fiore told Hayes that the message Bundy’s supporters sent to the government was: “Don’t come here with guns and expect the American people not to fire back.”

HAYES: What do you say to the argument that the BLM basically provoked this entire thing?

POTOK: Well, I don`t think it’s true. I think we`re talking about a man who is a thief, a man who has stolen a million dollars or whatever the precise amount might be from the American people, from his fellow ranchers, all the ranchers all over this country who actually do pay their fees.

You know, something else to respond to something the assemblywoman said, you know, in fact the jails, the prisons are full of people who have refused to pay their taxes for one reason or another.

So, you know, yes, I think the optics were bad. I think coming in there with helicopters and police dogs was almost guaranteed to provoke this kind of reaction, especially because the whole operation was dragging on day after day after day.

But, you know, at the end of the day, what these people are proposing is that we are not a nation of laws, that stealing money from other Americans is somehow a defense of the Constitution and liberty. You know, this whole idea of county supremacy truth be told is directly descended from groups like Posse Comitatus, you know, racist, anti-Semitic violent groups. That's where this whole ideology is coming from.