Armed militiamen are continuing to arrive in southeastern Nevada from around the nation with the aim of preventing the federal government from rounding up rancher Cliven Bundy’s illegally grazing cattle – and they don’t appear to be going away any time soon.

The Nevada standoff has emerged as the most significant gathering of antigovernment extremists since 1996, when supporters gathered briefly en masse outside the Montana ranch where a group of self-described “Freemen” engaged in an 81-day standoff with FBI agents who sought to arrest key members of their group.

The militiamen at the Bundy Ranch are from all over the United States. Only a few, however, are from militia groups large enough to be known quantities. 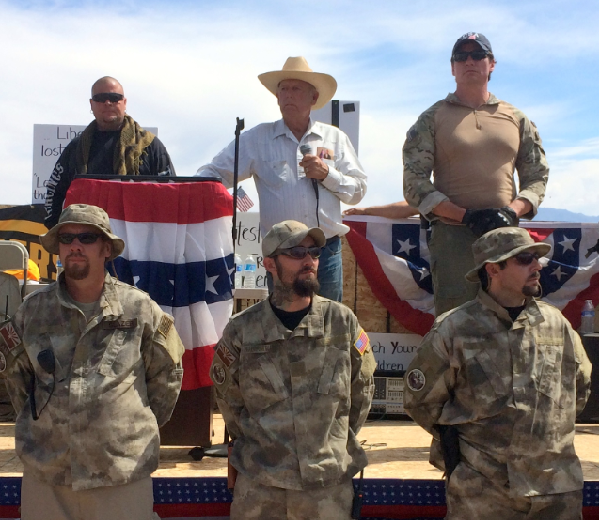 A Las Vegas Review-Journal report noted that one man from Philipsburg, Mont., claimed to represent the “West Mountain Rangers,” a group that has not popped up on anyone’s radar previously. A Utah man said he was from the People’s United Mobile Armed Services, whose Facebook page says that they are a “Revolutionary Movement for the Second American Revolution” but are otherwise almost completely unknown.

Indeed, most of the militias in attendance appear to have very small memberships, such as the Oklahoma militiamen who showed up hankering for a fight: “It’s up to the feds. The ball’s in their court! You can do this legally or if you want to try to do a land grab violently, you can do that. We’re going to resist you!” They make the dubious claim in their video that they are 50,000 strong.

Members of an outfit from the Idaho Panhandle turned up in Nevada, the Idaho Lightfoot Militia. They have been organizing for over five years now and are a known quantity back home. Their level of participation in Nevada is unclear, and their leader, Jeff Stankiewicz, was quoted saying he discouraged people from going.

Ed Komenda, a reporter for the Las Vegas Sun, spent some up-close time with militiamen at the scene in Bunkerville, and what he found was especially eye-opening. His piece for the Sun revealed a high level of anger and testosterone, whipped up by conspiracist paranoia, that seems unlikely to level out any time soon. One militiaman in particular, who was fond of dropping the F-bomb, rode with Komenda and other militiamen to a protest with an assault rifle and plenty of other weaponry, including a .338 Magnum rifle and a Marine-issue 7-inch knife:

Rapolla is prepared for a war with his government. His guns, he says, aren’t just a show of force. Not knowing what to expect when he rolled into town, he says he was ready to die — and, if he must, shoot a federal agent.

Komenda found that, to a man, these people were more focused on having an armed conflict with federal agents than on rescuing a cattle rancher from supposed tyranny:

In their view, the government’s goal was to exterminate the Bundys. As several militia members put it, they came to the Bundy ranch to prevent another Waco — the 1993 standoff between federal agents and David Koresh that left 76 men, women and children dead. That incident helped spawn the modern militia, which is not an official force but a collection of armed citizens who believe the government is out to destroy the nation and enslave the American people.

“You feel an obligation as an American,” DeLemus said, standing near his tent, wearing a water-filled hydration pack, full Army fatigues and loaded sidearm. “You’ve got an American family who is rightfully on property their family paid the grazing rights on over a hundred and some odd years ago and our government comes in and decides they want to change the rules on that, break the law, really, by changing those rules after a contract’s been signed with their great-great-grandfather — I believe it was — and then run them out? And then use force on their family? And then put the full weight of the American government on them? Shame on them.”