Nevada rancher Cliven Bundy, whose showdown with federal authorities over cattle grazing rights has attracted a large contingent of antigovernment “Patriot” movement supporters – as well as fawning coverage from Fox News, and the open support of various mainstream conservative politicians – has discovered that openly spouting bigotry is a good way to lose your backers.

Bundy was quoted in a Wednesday New York Times piece spouting off at length about race relations, and it was not pretty:

And because they were basically on government subsidy, so now what do they do?” he asked. “They abort their young children, they put their young men in jail, because they never learned how to pick cotton. And I’ve often wondered, are they better off as slaves, picking cotton and having a family life and doing things, or are they better off under government subsidy? They didn’t get no more freedom. They got less freedom.

Now Media Matters has posted footage of his remarks:

Immediately, one of Bundy’s more prominent political supporters – Republican Sen. Dean Heller of Nevada – distanced himself from the rancher, telling the Times reporter that he “completely disagrees with Mr. Bundy’s appalling and racist statements, and condemns them in the most strenuous way.”

Spokesmen at the offices of Sen. Rand Paul of Kentucky, another prominent Bundy backer, did not offer the Times an immediate response. But today Paul denounced Bundy’s rant, saying: “His remarks on race are offensive and I wholeheartedly disagree with him.”

Texas Gov. Rick Perry, who also has openly supported Bundy’s campaign, demurred when asked about the remarks, saying he hadn’t read them, and told “CBS This Morning” that the Bundy matter was only “a side story” in the larger picture regarding federal land use issues.

At Fox News, where the Bundy Ranch story has filled hours of airtime over the past two weeks and its hosts – particularly Sean Hannity and Greta Van Susteren – have openly championed Bundy’s cause, there was mostly silence. The network’s coverage of the scene at the ranch suddenly disappeared: Media Matters reports that “Fox had mentioned the rancher only twice, and never covered his racist comments.” 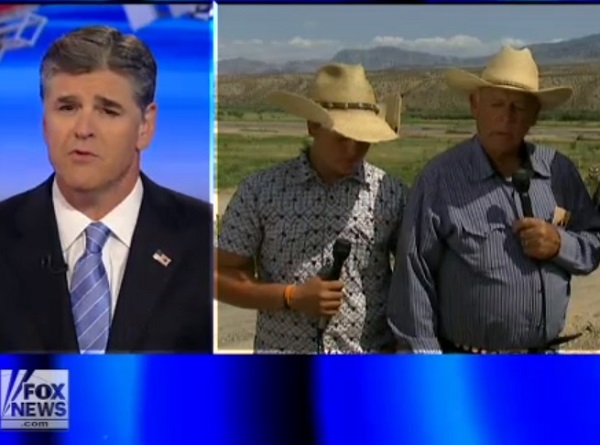 Occasional host and frequent guest Andrew Napolitano told viewers to “forget the battle in Nevada” and focus on events in Texas instead.

Van Susteren did speak out on her blog: “Let me make this plain: I condemn what Cliven Bundy said about African Americans.” Hannity so far has made no comment.

Some of Bundy’s media supporters, however, were content to make excuses for him.CNN’s Dana Loesch, a conservative pundit who has been among Bundy’s more avid supporters, commented: