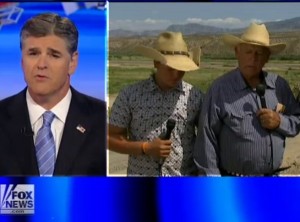 Cliven Bundy keeps doubling down on his observations about African Americans, and many of his erstwhile supports can’t run away quickly enough.

On Thursday, the New York Times published racially incendiary remarks by Bundy, who mused about the status of black people – “Are they better off as slaves?” he asked. Bundy’s support from mainstream conservatives and prominent Republicans essentially vanished. So he began making the media rounds again, trying to explain himself.

But Bundy didn’t apologize or back away from his remarks. Rather, he doubled down, emphasizing at a press conference that he thought he was right to ask such questions:

He also went on CNN’s “New Day” program this morning and again doubled down, this time saying Martin Luther King hadn’t finished his job if black people were going to be offended by the things he said:

Maybe I sinned, maybe I need to ask forgiveness, and maybe I don't know what I actually said. But when you talk about prejudice, we're talking about not being able to exercise what we think and our feelings —  we don’t have freedom to say what we want. If I say 'Negro' or 'black boy' or 'slave' — I’m not — if those people cannot take those kinda words and not be offensive, then Martin Luther King hasn’t got his job done yet.

The flight from support for Bundy continued apace, with Republican politicians and party officials continuing to assert that they have nothing to do with the Nevada rancher – who has been in a standoff with the Bureau of Land Management over his illegally grazing cattle.

However, the militiamen who showed up with weapons at Bundy’s ranch in Nevada say they continue to support him; indeed, they see the news stories as just another conspiracy. “It’s part of misinformation to maintain the divide,” one militiaman told the Las Vegas Sun. “Things like this will be put out there to discredit Bundy."

Controversial black conservative Alan Keyes defended the remarks, saying they weren’t racist: “He wasn’t talking so much about black folks, but about the harm and damage that the leftist socialism has done to blacks.”

But the majority of Bundy’s mainstream backers have made clear that they want to talk about other cases of “government abuse” now, instead of Bundy’s. At Fox News, Bundy’s biggest on-air champion, Sean Hannity, also denounced Bundy, but seemed to blame it all on the “liberal media” as well.

Hannity devoted much of his show Thursday to simultaneously denouncing Bundy and the New York Times, as well as his critics:

HANNITY: All right, allow me to make myself abundantly clear. I believe those comments are downright racist. They are repugnant. They are bigoted. And it's beyond disturbing. I find those comments to be deplorable, and I think it's extremely unfortunate that Cliven Bundy holds those views.

Now, while I supported the Bundy ranch as they took a stand against the Bureau of Land Management, I was absolutely dismayed and frankly disappointed after reading the article and then hearing the commentary. However, I also want to say this. The ranch standoff that took place out in Nevada was not about a man named Cliven Bundy. At the heart of this issue was my belief that our government is simply out of control. Now, to me, this was about a federal agency's dangerous response to a situation that could have resulted in a catastrophe, and that means people dying and people being shot, kind of comparable to what we saw in Waco, Texas.

Hannity then rambled through a number of other supposed examples of out-of-control government, including cases of veterans being given bad medical care and federal water-rights disputes in California, and then concluded by throwing Benghazi and Obamacare into the mix. According to Hannity, if anyone was to blame, it was more likely the New York Times (for their Benghazi coverage) and Jon Stewart (who has been mercilessly pillorying Hannity for his coverage of the Bundy standoff).

The New Yorker’s Andy Borowitz satirically devised a statement by Fox News to deal with the controversy: “Cliven Bundy’s outrageous racist remarks undermine decades of progress in our effort to come up with cleverer ways of saying the same thing.”