Craig Cobb, the white supremacist who tried to take over a small North Dakota town and turn it into an all-white enclave named “Cobbsville,” was given four years probation on Tuesday after pleading guilty to charges he terrorized residents last fall. 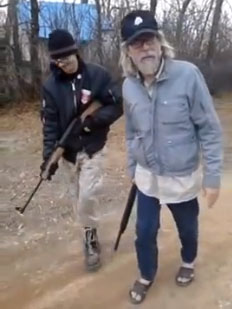 Cobb walking around Leith armed before his arrest (YouTube).

Cobb, 62, has been in jail since November 2013, when he was arrested after parading through the streets with a weapon –– something he claimed he had to do in response to harassment. Cobb’s original charges included seven felony counts of terrorizing, which would have carried a maximum sentence of 30 years had he not entered into a plea agreement.

Leith officials met news of the sentence with disgust, feeling that Cobb’s efforts had upended the town’s idyllic calm and changed the lives of Leith residents forever.

Leith Mayor Ryan Schock, who was hoping for a longer prison term, said he worried it would take a long time for the town to recover from the turmoil, especially given that Cobb on Tuesday would soon be a free man. “When are we going to be safe from him?” Schock told the Associated Press. “He has made his mark on our lives.”

Cobb moved to Leith more than two years ago and quickly began buying properties, then selling those properties to other white nationalists. His plan was to build an all-Aryan stronghold named “Cobbsville” that could stand against racial diversity and multiculturalism. Those plans were first revealed by Hatewatch in August.

With his legal troubles behind him, Cobb said he plans to “retire from white nationalism” and ask the court for permission to move to Missouri to care for his ailing mother. “I regret my actions. I know I was wrong and I accept responsibility for my actions. It was an unfortunate confluence of circumstances and bad decisions on my part,” Cobb told the court.